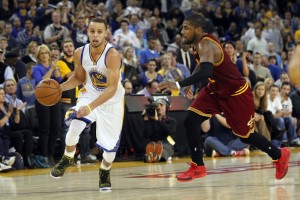 Since the NBA finals seem like an eternity away there has been plenty of time for the various news outlets to choose interesting storylines as to which team should be favored to win the NBA title.  One of the recurring conversations I keep hearing, and point of contention is that the Western Conference is just that much better than the Eastern Conference. The argument continues on that although the Cavaliers handily beat down on the Eastern Conference foes, the Warriors have gone through the gauntlet that is the Western Conference and will be unlike anything the Cavs have seen so far in the playoffs. The prevailing theme is that the East is a joke compared to the West.

While I agree that there are better teams across the Western Conference than there are the Eastern Conference, its hard for me to rationalize the play of one team based on all the others in their conference. It’s kind of like the recurring NCAA football conversation every year: The SEC is the best conference and therefore whoever comes from that conference will be the favorite to win it all. Well how did that work out this year? Or the year before that?

My in-sincerest apologies to the state of Alabama.

Yes, the Western Conference in the NBA, just like the SEC in college football, seems to be stronger top to bottom, but does that really matter? I don’t think so.

The point of this article is to lay this theory to rest, because to me it is asinine. The focus should be on the teams that are ACTUALLY playing one another rather than all the other teams that weren’t good enough to be there in the end.

So lets take a look at the teams themselves.

Cleveland, as it is right now, became  the team they are currently composed of on January 9th. Why? Well this is when the final additions to their roster actually joined the team and began to contribute, specifically Timofey Mozgov’s first game in the Wine and Gold. How interesting is it that this also happened to be the first game of the season between the Cavs and Warriors? The Cavs played the game without LeBron James that night and lost 112-94. By the look of the final score it was a drubbing. Having watched it, it was pretty competitive through the middle of the fourth quarter, at which point the Warriors blew the Cavs away. Tip of the hat to the Warriors, but as I mentioned, this was the first game the new Cavs played together. It’s tough to really utilize that specific game as a benchmark for what we may see in this series.

So, back to my original thought process of why January 9th is the starting point to this argument. I wanted to take a look at the Cavs from this point on and see how they developed while also seeing how they did against the western conference.

After January 9th, 2015 the Cleveland Cavaliers went 14-4 against the Western Conference. This comes with the asterisk of taking in to account that LeBron didn’t rejoin the team until January 13th against the Phoenix Suns. From that point on that record changes to 14-2. The Cavs only two losses came against the Suns in LeBron’s first game back, and an OT thriller with Houston Rockets where James Harden went for 33 points and Kyrie Irving did not play. So, from my point of view thats a pretty good record against what everyone says is the better conference.

But who did they really beat in that stretch?

Well, from that point on the Cavs beat the following Western Conference playoff opponents: Clippers twice, Portland once, Memphis once, San Antonio once, Dallas once, and the Warriors once. Thats 6 of the 8 western conference playoff teams, including Golden State. (Their other wins came against the Lakers x 2, OKC x 1, Kings x 1, T-wolves x 1,  Suns x 1, Jazz x 1)

Not a bad record against the West right? Overall in that same time period, the Cavs were 42-13. These numbers include the wins and losses through the conference finals.

Now lets take a look at Golden State. The Warriors have had the full season to play as the unit they are currently constructed as. So in theory, their level of cohesion should arguably be better than the Cavs. At this point both teams clearly are playing well so I don’t know how important of a factor that is, but still I’d argue there is value in that.

However, in the same time the Cavs amassed the record I stated above, the Warriors also had a similar stretch of wins and losses amounting to a record of 51-13. A total of 9 more wins than the Cavs and the same amount of losses.

Similarly, the Warriors record against the Eastern Conference within that time was 14-5. With losses to Chicago, Atlanta, Brooklyn, Indiana and Cleveland. A great record against the opposite conference, but also nothing suggestive of being dominating.

Its essentially at this point where I don’t understand the bias or suggestion from any media outlet that the storyline of East v. West should matter.

If you just look at the facts, both teams are playing extremely well. Both had mostly similar successes, but some failures against the other good teams from the opposite conference. So why push a narrative that doesn’t make sense?

If anything you could argue that Cleveland, by the slightest of margins and due to circumstance, did better against the Western Conference than the Warriors did against the Eastern Conference since that January 9th date. As an arguably new team, the Cavs overcame more obstacles to get to the same level of success as the Warriors. The talk about this storyline is really nonexistent. Seems odd doesn’t it?

Currently it seems that most people believe that Golden State should win this series as they are the better team from the better conference, but that the Cavs could pull it off because they have LeBron James. I think this series will be far closer than some are thinking because of the facts I mentioned above. When I read media members and fans suggest that the Warriors could win in 4 or 5 all I can do is shake my head and wonder what games people are watching? Yes its good to support your team, but at the same time reality exists too.

My reality is this; this series will be a great one. These two teams have been hitting their stride at the right moment and the battles between great players will be fun to watch. The Warriors and the Cavs are in the finals, and yes they represent one team from the East and one team from the West, but I think that is as far as the connection really needs to go. I cannot wait for the finals to begin, June 4th can’t come soon enough.