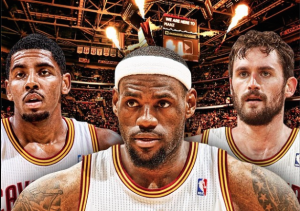 What should we expect in the first year with this revamped roster in the 2014-2015 season? With the main additions this year of Kevin Love and Lebron James, the Cleveland Cavaliers will go from having one of the worst records in the NBA, to an elite team in just one offseason. The “Lebron Effect” took place immediately after he decided to come home, and that is getting his trusted, veteran shooters to follow him and chase what every NBA player is after, championships.

But, even with this loaded roster, things will not come easy for them.  With all of this new attention, comes added pressure and a permanent target on their back.  As we saw this past season with the Spurs, championship teams don’t always get built overnight.  Players need time to know how to play with each other. Coaches need time to learn how to put players in positions where they can be successful.  But most importantly, this team needs to buy in to trust and respect one another in order to reach the pinnacle of every NBA players dreams.

This first year will be filled with many ESPN Top 10 plays, and we will see a lot of exciting flashes of what this team could be when everything is clicking.  We will also see flashes of what seasoned veteran teams can do when they have been together for years and everyone buys in and knows their role. The key will be to take a step forward each game, win or lose.

The good thing is, the core of Lebron, Kyrie, Love will be together for a minimum of 5 years after Love signs his extension in the offseason.  This will give the players, coaches, GM, and owner plenty of time to figure out what works and what does not.  The city of Cleveland has been waiting for this type of excitement for a long time, and it won’t be long until we will be holding championship parades in downtown Cleveland.