United States soccer is in yet another holding pattern; it’s the unfortunate rhythm of the international soccer schedule. The World Cup is in the rear view and the Gold Cup is approaching this summer. The USMNT is currently in Europe playing a couple friendly matches, allowing Jurgen Klinsmann to take a look at the bottom section of his roster, get Jozy Altidore some playing time, and let Michael Bradley prove that his performance in the World Cup was an aberration and not the new normal. 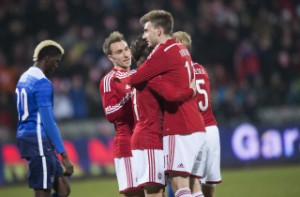 This rhythm is difficult for fans, the team plays around with the roster, struggles on defense, and loses friendly games that are considered meaningless (although, when the USMNT beat Italy in a friendly a couple years back, it wasn’t so meaningless…). y

These games are supposed to generate growth and development so Jurgen Klinsmann can make the most educated selections for big tournaments. He also needs to use this time to construct an identity within his team, something that many are clamoring for following their lackluster loss to Denmark.

This summer’s Gold Cup in July is what Klinsmann is looking towards, and in my mind these types of tournaments are the problem for the US soccer team. The excitement generated at last summer’s World Cup might bring in some more casual fans for the Gold Cup. However, a tournament like the Gold Cup is precisely what creates false expectations. The team’s first three games in the Gold Cup are against Honduras, Haiti, and Panama (all on United States soil).

The United States and Mexico are the bullies in the CONCACAF, sure some teams pop up and kick them in the shins every now and then, or a Costa Rica has a great World Cup, but this group of countries that the USMNT has to compete with does not push them to be better.

The competitive level of the CONCACAF is not high enough; it’s as simple as that. There is a reason why countries from Europe and South America win World Cups, there is a plethora of talent on those continents, and one bad run of qualifying leaves them out of the big tournaments. The USMNT has been able to punch a ticket to the World Cup every year since 1990, once they started to take it seriously.

The best thing that could happen to the US team right now is a couple staggering losses in the Gold Cup. They need something to generate a little urgency and make them realize that the gap in the CONCACAF is closing in on them. The United States’ road to the 2014 World Cup might have been the starting point in that challenge. The USMNT had to scrape and claw through qualifying because they struggled on the road to beat weaker opponents.

If we take a moment and look beyond this summer’s Gold Cup, there is a massive tournament in the summer of 2016. The United States will have a wonderful opportunity to really cut its teeth against this hemisphere’s best teams. The Copa America is turning 100 years old, and to honor that it will be hosted in the United States and it will also include teams from both North and South America.

This is a huge chance for Klinsmann to really get an idea of what he’s looking at for the 2018 World Cup in Russia.

The hope is that over these next few years the United States is challenged in real games by the CONCACAF nations so it becomes clear the gap is closing on them. Staying sharp, and not simply knowing years in advance that a World Cup birth is certain, will help this country grow and possibly make into the unknown depths of a World Cup.

Read my blog The Imperfect Game