If we just look at statistics to determine the worth and value of a player than Andre Drummond is a superstar center.  He scores, he rebounds, he passes and he blocks shots at a very high level.  So why are there rumors that the Cavs want to trade him?  The first question we might ask is why did Detroit traded him to the Cavs in the first place for a ham sandwich and box of stale cookies?  The answer to both questions is simple and the same. Andre doesn’t have what it takes to be an up-and-coming teams centerpiece but…he is paid like one.  Drummond’s lack of outside shooting in todays NBA doesn’t allow for spacing when he’s on the floor, and his desire to be “the guy” often results in very odd shot selections and untimely turnovers.  Because his production is so high, developing teams like Cleveland and Detroit try and play through him when he’s on the floor. The result is often a mixed bag, as the big moments are often too big for him, resulting in more team losses than wins.

Multiple teams however are rumored to be lining up for his services. Good teams like Toronto, Boston, Brooklyn and both LA franchises all seem to have a need for his talent. The commonality amongst these suitors, is that they all have established stars and are only looking for that third or fourth piece to get them over the top. And lets be clear, as far as third or fourth pieces go, having Andre Drummond on your team is like winning the lottery. 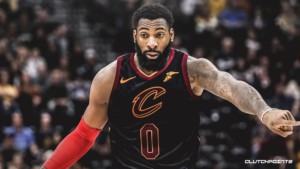 From the Cavs perspective Andre has been very fun to watch and his effort on the court has definitely provided strong value in terms of leadership and as a mentor to the young Cavs squad.  He plays with energy, and he brings unrivaled passion to the floor which his teammates  gravitate towards.  The issue for Cleveland is that with its brilliant trade for Jarett Allen, the Cavs now have a much younger player with a similar skill set and higher ceiling.  Jarret’s ability to space the floor, and shoot the ball from range along with his inside presence, and defense demands that the Cavs prioritize his growth by providing him starting minutes. The development of the Cavs young core of Allen, Sexton, Garland and Okoro must be the focal point of this season.

Andre Drummond is very fun to watch, and on a good or great team, he will shine brightest.  I can see him averaging 20 rebounds a night on a squad where the opposing teams defense is focused on stopping top tier backcourt talent, leaving him to dominate under the rim.

What the Cavs will get for Andre in a trade is to be seen, but his talents and skillset fit the needs with multiple contenders in the East and West.  Cleveland should try and trade him for a young player that fills a need like a scoring small forward, or a stretch four to replace Kevin Love.  The Cavs will probably have to take on some bad contracts to make this happen, but it could be worth the dead money.. Kyle Kuzma anyone?   Just a thought….