Taking a look at the Cleveland Cavaliers. My opinions on the players and whether they should go or stay.

I really like the play of Darius. Although he’s only 6’1 and 175 pounds, he plays under control. The game has slowed down for him. He has become a more willing passer as the season has gone and his shot selection continues to improve. Garland’s size is the only thing that puts him at a disadvantage.

Darius should be a part of the core as the team moves forward. I really enjoy watching him run the point. Garland has even improved in late game situations. 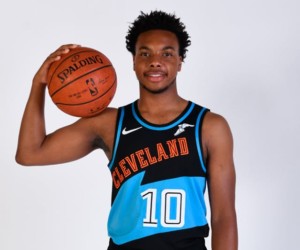 Darius Garland has adjusted quickly to the NBA game.

MATTHEW DELLAVEDOVA- One of my favorite Cavs. “Delly”, as some people may know, made it to the NBA the hard way. Through the developmental league (G-league). His defense has always been there and his offensive game has come a long way. Dellavedova has played the role of mentor and provided depth at the guard position.

I was really glad the Cavs kept him around to start the season. And though I’d like to see him stick around, he is an expiring contract and Cleveland needs to see if they can get something in return for Delly. Even if it’s a second-round pick or a young player that needs playing time and could potentially be a solid player for Cleveland down the road.

DANTE EXUM- This was a missed trade on general manager Koby Altman’s part. He sent guard Jordan Clarkson off to Utah for guard Dante Exum and two second-round picks. I haven’t been impressed with Exum yet. I’m not too sure he’ll ever become the player many people thought he would become. Exum is under contract for one more year. If Cleveland could get something for him or include him in a package deal to sweeten things up for Cleveland I would do it. If not, he’ll be used for nothing more than depth purposes.

BRANDON KNIGHT- Can they get anything for knight? Another expiring contract. If Cleveland can get anything for him, go for it. If they can include him in a package deal, that’s probably a good thing.

JOHN HENSON- The only legitimate center Cleveland has on their roster. Henson could be very attractive for multiple teams with his size, blocking ability, rebounding and passing ability and expiring contract. Contenders that need a rim protector, depth at center and a contract coming off their books after the season, Henson could get the Cavs a descent amount. Henson is 29 and is not apart of the future of the Cavs.

KEVIN LOVE- From being frustrated with all the losing and his lack of touches on offense, it’s time for Cleveland to move on. The question is, can the Cavs find a team willing to trade enough back in return for the 31-year-old five-time all-star? Believe it or not, it’s becoming more difficult for Cleveland to move Love. Kevin is still a good player and could start for a contender. This year, Love is averaging 18 PTS, 11 rebounds, 44 percent from the field, 37 percent from 3-point range and 82 percent from the free-throw line.

Love can play power forward and center. The biggest problem is his four-year $120 million contract. Any team that trades for Love is stuck with him for the rest of this season and three more years. Unless they trade him. Cleveland can’t just trade Love away for nothing. If they feel they can’t get enough back in return, they might as well hang onto him. Something else to remember. A lot of teams could be saving up cap-space for potential 2021 free-agents Kawhi Leonard, LeBron James, Giannis Antetokounmpo, Paul George and Bradley Beal.

LARRY NANCE JR.- There’s a lot to like about Larry Nance Jr. Despite not being a great shooter or scorer, Nance Jr. is very athletic, can defend, good passer and is great off the floor. Cleveland has the 27-year-old under contract until the 2022-23 season. By then, Cleveland could be contenders. I hope Larry Nance Jr. is around for a long time.

CEDI OSMAN- Osman found more playing time once LeBron James left for Los Angeles. Osman has improved as a spot up shooter from 34 percent to 39 percent this season. His shooting, overall has improved from the field in general. Osman is only 24 years old and his contract expires at the end of the season. I would like to see Cleveland extend Osman. I do believe he has a place on this roster for the future and will only get better. Cedi is also young enough to grow with the younger Cavaliers such as Kevin Porter Jr., Darius Garland, Collin Sexton and Dylan Windler (out for the season).

KEVIN PORTER JR.- The rookie out of USC has shined since he was given a chance. Averaging 8 points a game, shooting 43 percent from the field and extremely athletic. I have enjoyed watching Porter Jr. play. Right now, Porter Jr has a knee injury and will still be out until February I’m guessing.

The more experience Porter Jr. gets, the better he seems to get. I’m really looking forward to seeing how good he can be. Once he adds some muscle to his body, Porter Jr. could become very special.

COLLIN SEXTON- I really like the speed, work ethic and drive that Sexton brings to the court. Sexton is averaging 18 points a game and is shooting 45 percent from the field, 32 percent from 3-point range and is one of the fastest players in the NBA.

Now, here’s the downside. Sexton tries to take over late in games too often and loves going one-on-one too often. While Sexton has become a more willing passer through the first three quarters, he still misses the open man more often than not and it has cost the team in the final five minutes of games.

At some point, Sexton may be better served as a sixth man if you will. His offensive game is good and the bench could use something like that once Cleveland can find a good shooter down the road.

TRISTAN THOMPSON- I’m not sure who can bring in more in a trade between Love and Thompson standpoint. Thompson has been playing his best basketball of his career the last two seasons. I thought Thompson couldn’t play well without LeBron James. I was wrong. Tristan has actually played better since James left.

This is a contract year for Thompson. Three things could happen with Thompson. The first, Cleveland can try and trade him. Second, if they can’t trade him, he’ll hit free-agency and that could get interesting for Thompson and ugly for the Cavs. Why? Because Thompson could sign elsewhere and Cleveland gets nothing for him or they could try and resign him, but at that point, they’d likely be competing with other teams and who knows how much it would cost Cleveland to resign him.

So, it’s either trade him, he walks after the season and they get nothing for him or they resign him. I’d rather trade him.

Cleveland is one of the worst teams in the NBA. The Cavs should still be able to make some games close and how about beating teams like Washington, Charlotte, Chicago, New York and Atlanta from the East. In the West, Golden State, Sacramento, Minnesota and New Orleans.

Getting beat badly by those teams is an ugly loss, even for Cleveland.