The next part of a series of articles focusing on the best players in Singapore’s football scene. Previously it was Safuwan Baharudin for his exploits in the A-League, this time around it is goalkeeper Izwan Mahbud, after his performance against Asian heavyweights Japan.

Standing at only 1.79m, relatively small in stature for a goalkeeper, Singapore’s custodian Izwan Mahbud continued his fine form this season with an outstanding man-of-the-match performance against four-time Asian Cup champions Japan. This allowed Singapore to belie their relatively inferior footballing ability and reputation to hold the Japanese to a goalless draw awayin Saitama.

southeast asian minnows basking in the glory of a big scalp

Izwan’s fine display continued on from his heroics in the Malaysia Cup, where he singlehandedly outwitted Kelantan’s South American strikers Gilmar and Erwin Carrillo to help his side, LionsXII, win the Malaysia Cup – a Singapore representative side’s first since rejoining the Malaysia Super League.

Having only been Singapore’s third-choice goalkeeper at the 2010 Asean Football Federation (AFF) Championship, an injury crisis to then first and second choice goalkeepers Lionel Lewis and Hassan Sunny forced then-coach Raddy Abramovic to use Izwan in a crucial two-legged 2014 World Cup qualifier in July 2011. To add to the pressure, it was against traditional causeway rivals Malaysia. Izwan made a number of significant saves and has since not looked back.

a young izwan versus rivals malaysia

Shortly after, the former Young Lions goalkeeper displaced both veteran goalkeepers and established himself as Singapore’s number one. As part of the first eleven for the 2012 AFF Championship, Izwan helped Singapore to their fourth title, playing all seven matches and keeping three clean sheets. Izwan also moved to then-newly established side LionsXII in the same year to compete in the M-League. He was a key part of the team that won the M-League in only the LionsXII’s second season back in Malaysian football, and then added that 2015 Malaysia Cup to his domestic honours.

At only 24 years young, Izwan has already achieved much and is yet to reach his goalkeeping peak – which is usually close to 30. His quick reflexes and general command of the box are already well-established, as seen in his two out-of-this-world saves against Japan. The first was from AC Milan’s Keisuke Honda’s powerful header from a corner, which Izwan did brilliantly to stick out his right hand to keep out; the second was from FC Mainz’s forward Shinji Okazaki, whose header was not only saved by Izwan but clawed off the line as it looked to have snuck in. Izwan did have his moments of good fortune when Honda’s free-kick came off the bar, and Urawa Red Diamonds’ centre back Tomoaki Makino’s back post header just missed the post. However, one could argue Izwan made and deserved his own luck with several top-draw saves, managing to frustrate established European-based footballers like Borussia Dortmund’s ex-Manchester United playmaker Shinji Kagawa and Southampton centre back Maya Yoshida.

izwan more than held his own against top european-based players

His lack of height as a goalkeeper could work against his prospects of a move abroad to leagues of higher quality, but it is really time Izwan take the leap and leave the LionsXII for greater things. He really has it all, and can only develop his game further by facing higher quality opposition strikers in the bigger Asian leagues. Izwan may even be able to hold his own beyond Asia’s shores, like in America’s MLS or, as crazy as it may sound, less reputable European leagues like Netherlands’ Eredivise or Scottish football, should someone be willing to take a punt on him.

Izwan has already shown he has much consistency to his game, but with little competition in the immediate future for his LionsXII or Singapore number one jerseys – as highlighted by closest challenger Syazwan Buhari’s poor showing in the under-23 tournament at the 2015 SEA Games – there is a danger complacency may set in. However, having witnessed his rise ever since his Singapore debut in 2011, it is unlikely such complacency will set in for Izwan. Instead, without a move abroad, the real issue here could be his development stagnating, should Izwan realise his superior ability relative to the rest of the M-League.

For the immediate future though, with the challenge of finishing as one of the best runners-up in the second round of World Cup qualifying, it will at least be clear for Singapore’s current coach, German veteran Bernd Stange, that he has to build his team around midfielders Hariss Harun and Safuwan Baharudin, along with Izwan in goal.

along with izwan, hariss (14) and safuwan (21) will soon take the lead off most-capped international shahril  ishak (17)

This will likely be the core of the team for years to come, with the hope that some of the SEA Games squad, especially Fandi Ahmad’s son Irfan, Australia-based midfielder Pravin Guanasagaran and centre back Anumanthan Kumar, can come through and add to this core, as Stange look to push Singapore into the 2019 Asian Cup. To do this though, much will rely on the form and development of Singapore’s very own Izwan Mahbud. 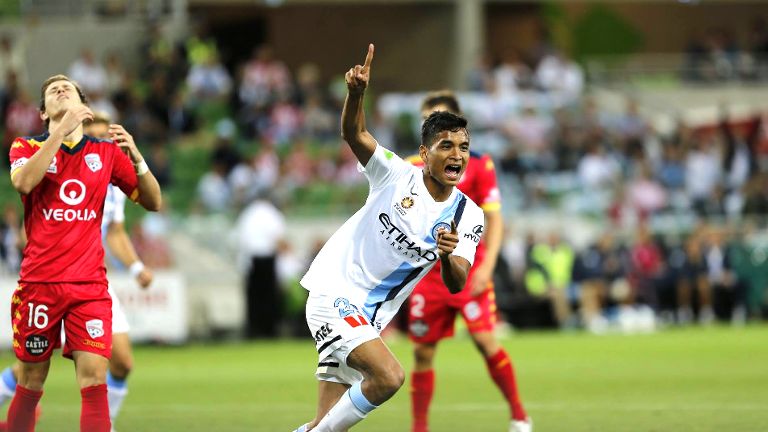 He may come from a tiny island nation in Asia, but he has a built comparable to Europeans, a slender figure belying his strength and stamina that could match athletes from Africa, and football skills that some might associate with the South American continent. He is currently, undoubtedly, Singapore’s best all-round footballer, in terms of pure footballing […]