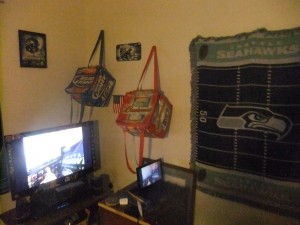 I did not want to bring it up again, but the Patriots cheat. Now that I got that off my chest, I have decided to be maybe the 1st of everybody else to politely ask, Bill Tom & Patriots Incorporated to please stop.

This is maybe the 1st time since a blowout game came about years ago, the story that revealed the Patriots were asked by Green Bay Coaching staff when they sent somebody over to the other side of the field &, asked the Patriots, to “please stop”. That sounds like a report from ESPN’s John Clayton. I am the 1st to politely ask, anyway.

Moving onto my story that has me excited, is the ways Seattle has improved to a dominant powerhouse. The Seahawks are not only a Playoff Team Franchise now, but are also looking more convincing as a returning Super Bowl Team, or if possible in between the 2. A Dynasty.

Anything is possible in the NFL, that includes losing a Super Bowl when it was a slam dunk.

Looking at days of old of the Seahawks. We used to be loyal fans with really maybe a lot lower expectations, mixed with a lot of hope. I explain, it is like knowing your team is not even a playoff team at times, but like other loyal fans, you hold a high expectation for them to excel some way, somehow. (Laughable slap my knee thinking about it.) (I felt this way towards 2 teams for years, Seahawks & Jaguars.)

Sort of a long story, but I am an NFL also in general. That is maybe why fans like watching games that do not have either of their teams in them. We just love the sport, & certain games also mean things for other teams, with the outcome of games, too.

[I used to like both the Seahawks & Jaguars, ever since I was 9 for Seattle, & when they became a franchise Jacksonville. I sort of dumped the Jaguars, so I decided to allow all other people writing for them to go ahead, & leave it alone. So I really cannot say about them anymore]

It is the NFL &, any part of the Season can have surprising turnouts. Like how in the World did certain teams at the bottom even win any games? It can be more crazy if it were an example of when the Tampa Bay Buccaneers, while team hasn’t been doing so great at all, had almost beat Seattle. If Seattle would had lost is what I am talking about. Some team comes in with fresh players, good team workouts & professional level game plans. It did not matter they sucked that day, did it.

NFL has such great competitive games week to week.

I have many reports I took the time to write on about Seattle. I am thinking heavily of putting some of them here. If they seem not too far outdated, I may post a few.

Seattle has upped the ante. Every NFL Team must do what they have to do to compete & try to be the top team. Seattle has been able to raise their self up, team-wise, from scratch: point out from other sources of course, I cannot remember where except to site the NFL.com webpage with the credit of pointing out, Seattle cut everybody. Put something together great from trades/trading, Drafting, Building the Team from there to already one Super Bowl win. That is pretty awesome.

What other examples are other teams going to take from Seattle that are practical, that makes better sense? any Player that gives enough to his team, any, from being drafted to becoming 1 of top team captains, must be recognized in his near future contract. I mean no matter how many cuts a team is making or dollars they want to save, when players step up, they need to be paid (recognized in payment). We all know that part. Wont argue it is a lot of money, but they earned it. Cannot say anybody earned too much money, but greed is as we all know a problem, also.

Don’t be greedy Cowboys, & for crying out load give Micheal Irvin more respect, too.

Only guys I think that have been cut from Seattle, not other teams like Cowboys released DeMarco Murray; in my opinion I think it was wrong of them, but he could turn that totally back around on them. Still being in the division &, now a true rival, Murray can comeback to haunt Dallas.

When Seattle cut Golden Tate I felt it was because he was becoming a locker room problem, more than likely.

If Seattle ask any players to comeback & practice or rejoin the team, they think the guys wont be a problem. That’s just what I think, & have no real proof of it. Maybe except how it comes about on the field, team to team.

Who will miss the playoffs? Who will replace playoff team or teams in NFC &, AFC?

It is going to be very interesting not only to see Seattle play with the Jimmy Graham’s addition, but also watching the Saints, now. For some reason I need to keep track of them to see what other moves they make. How will they turn out & rebuild?

I missed too much of what has been going on lately. So I need to get back in, in order to know most from all the latest updates. Admitted.

Matt Hasselbeck in my mind is a Quarterback Player/Coach.

I have proof I had that sort of foresight then. A friend & I got into it, I unfriended him over it, & later apologized. I also successfully friended him back a few years later. The issue should be a laughable one, but am today like, arrg! Just sort of not mad, just grrr…

The only other thing, is the team built the way that it is, is also resulting Seahawks fans developing a brotherhood among their fan-base. I don’t know any that have such bonds created, & it is only getting better & better.

I still have expectations of the Seattle Seahawks, & they might be way higher, but am glad to have lived in the era to see them win that Super Bowl.

Peyton Manning is a great person…just had to say that. Peyton is a true sportsman.