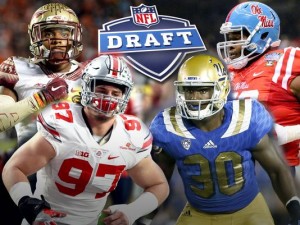 The 2016 NFL Draft is only hours away now and the rumors are rampant. Jared Goff and Carson Wentz highlight the draft as the more-than-likely top-two picks, however, after that, it’s anyone’s guess. Without further ado, the 2016 Stevenson NFL mock draft

After giving up a King’s ransom (2 first, second and third-rounders and more) to attain the No. 1 pick in the 2016 Draft from Tennessee, the Rams make a splash with their relocation and make a bigger splash in drafting their franchise quarterback in Goff. The California kid gets to stay put and grow with Todd Gurley to rely on.

Amid trading for the No. 2 pick, the Eagles get their quarterback of the future in Wentz despite re-signing Sam Bradford several months ago. Executive Vice President of Football Operations Howie Roseman confirmed Bradford will remain the starter in 2016 but added they will select a quarterback at No. 2.

The San Diego Chargers went out and got their franchise quarterback Philip Rivers a deep-threat in Travis Benjamin and, amid the trades for the first two picks, they are positioned to select the best player in the draft. Tunsil was pegged in at No. 1 for the Tennessee Titans until team’s traded for Goff and Wentz, essentially. Rivers got a little help with Benjamin coming to the Chargers, paired up with a healthy Keenan Allen, and a top-tier offensive lineman.

The versatile defensive back has a great possibility to be the best player in this draft class and the Cowboys can’t pass on the athlete Ramsey is. Playing both cornerback and safety in college, Ramsey brings the traits a leader and pro bowl caliber player requires. One of the more athletic players in the draft, Ramsey did wonderful at the NFL Combine and only helped his stock.

The Jacksonville Jaguars have 2015 first-rounder Donte Flowers coming back for 2016 and add another pass rusher to help. Joey Bosa was the No. 1 player after the college season and he finds a good situation with the Jaguars. Bosa attains some freakish abilities and is arguably the most talented football player in the draft, although his fit and transition is questioned. Linebacker is more than likely going to be Bosa’s position here in Jacksonville.

10.5 sacks in 2015 for Buckner is good enough to label him as a top player in the NFL Draft and, even more importantly, his familiarity with the 3-4 defensive scheme makes him an obvious choice for Baltimore. Shaq Lawson of Clemson is also a solid choice at this spot, but Buckner standing tall at 6’7” combined with his speed is enough for Baltimore to take him here at No. 6.

San Francisco 49ers don’t find a trade partner here at No. 7 and go the safe route by taking Notre Dame’s Ronnie Stanley. With a poor offensive line, the thought process here isn’t too difficult as San Francisco might have the worst roster overall, along with the Browns. Upgrading an important position while getting a player for the next ten seasons is a step in the right direction.

Although tempting for the Browns and Hue Jackson to take Elliott at No. 8, they trade back and acquire more picks to start their rebuild. Miami has been working the phones for weeks now after attempting to snag their guy in Elliott amid losing running back Lamar Miller in free agency. They strike a deal to get the running back of the future and are ecstatic about it.

A great defensive back that may be the best coverage guy, the Buccaneers pounce on the opportunity to help stock up their defense. After adding Brent Grimes, Tampa Bay is excited about their defense heading into 2016 and look to protect Winston in later rounds.

The New York football Giants are desperate for a playmaker on defense and Leonard Floyd is their guy. Seeing his name soar up on the mock drafts of experts, Floyd is a talented prospect that has a motor that’s hard to miss. Definitely some weaknesses that need to be polished, however the Bulldog is a game-changing linebacker with great upside.

The Chicago Bears need all the help they can on their defensive line and Reed is a phenomenal run-stuffer that can immediately make an impact against the likes of Adrian Peterson and Eddie Lacy.

Rankins was excellent at Louisville and his speed for his position is quite impressive. The Saints need help all across their defense and Rankins is a prospect that can turn into a formidable player if coached correctly and given time to develop.

The Cleveland Browns capitalize on the Dolphin’s love with Ezekiel Elliott and trade back to No. 13. A freak of an athlete, Myles Jack drew representatives from every NFL team at his pro day on March 14 and did not disappoint. Still recovering from a knee injury, Jack got a 40-inch vertical and also 10’4” broad jump, good for fourth-best out of all linebackers in this draft class. Although he might not play in 2016 (some say he will play Week 1 while others say not at all in 2016), they take a top-five talent in the draft and have a great linebacker moving forward.

Chris Jones is a player that has seen his stock elevate increasingly similar to Floyd and will be drafted earlier than anyone would’ve guessed just weeks ago. The Raiders need help on their offensive line but Jones’ potential is too high to pass on.

After trading out of the No. 1 overall selection in the draft, the Titans are still more than content selecting the Michigan State product. Conklin has a lot of upside and is considered to be one of the “sure-things” in this draft class. The trade works out for the Titans as they still get their lineman to protect Marcus Mariota, plus additional picks.

The Detroit Lions have many options at No. 16 but ultimately select the pass-rushing Shaq Lawson out of Clemson. The Lions saw in 2015 how much they missed former first-rounder Ndamukong Suh and improve their defensive line with Lawson.

The Atlanta Falcons have been searching for an athletic linebacker for a few seasons now and can’t pass up the opportunity to select Reggie Ragland. Athleticism is without a doubt a weakness on this Falcons defense and they look to improve by selecting one of the most physical players in the draft.

Arguably the best quarterback prospect in two decades, Andrew Luck, was consistently beaten up due to a below-average offensive line in 2015 and their No. 1 priority is protecting their future. Decker has traits that are difficult to come by in the middle of the first round, and the Colts can’t pass up on him.

Although the Buffalo Bills desperately need to upgrade their defensive line, the retirement of Percy Harvin leaves them with Sammy Watkins and Robert Woods. Coleman provides quarterback Tyrod Taylor a genuine threat at the receiver position across from Watkins. A deep defensive line draft enables the Bills to add another versatile weapon to their offense.

The New York Jets have yet to re-sign quarterback Ryan Fitzpatrick and at pick No. 20 the third-best quarterback is available. Lynch’s size and athletic abilities are hard to miss, elevating his draft stock. Rumors of being taken by even the top-ten have come about and the Jets can take Lynch, re-sign Fitzpatrick, and move forward from there.

The Browns trade back from No. 8 and up from No. 32. The first trade was for value, receiving more picks and getting a top-tier player for the future. This one, they go and get their playmaker in Josh Doctson to provide Robert Griffin III some help offensively. Cleveland has been rumored to like Connor Cook in the first round, but need some receivers to make plays for whoever their quarterback is.

Although Fuller isn’t the best wide receiver necessarily on the board at No. 22, the Texans get the quickest receiver in the draft. Houston has their superstar in Deandre Hopkins, which is why they pass on the likes of Treadwell and Doctson to pair up the 2015 pro-bowler with a speedster in Fuller.

Earlier in the draft season, Treadwell was a potential top-five pick. After an average pro day, Treadwell has seen his stock, not necessarily plummet but, gradually decrease. The once consensus No. 1 wide receiver in this draft class is paired with Teddy Bridgewater and this Vikings team looks to compete in the NFC North.

The young stud (only 20-years old) offers an athletic, quick nose tackle that can exert a great amount of force to opposing offensive lineman. Despite his young age, Billings can become one of the best players in the 2016 draft class and paired next to Geno Atkins, should make this Bengals defensive line much improved.

Jackson has received more interest from the Steelers than any other team. Opposing NFL scouts add that Pittsburgh “can’t hide their love for him”, according to Dane Brugler. Pittsburgh definitely needs to upgrade their defensive backs and Jackson is perhaps the best player on the board as well.

Despite Seattle’s urgent need for both offensive and defensive linemen, they can’t pass on Darron Lee of Ohio State. Outside linebacker is still a need among the team and Lee slips down the board to Pete Carroll and company.

Robinson will make the Green Bay Packers a tougher team that can stuff the run. Robinson has a high ceiling and can really play at a high level, although he needs to develop and Green Bay has the coaching to do it.

Apple’s draft range was as wide as any first-rounder and he finds a good home in Kansas City. His man-coverage skills are as good as any cornerback and the Chiefs utilize man-coverage more than most NFL team’s.

Burns comes in and fills a position that is worthy of upgrading. The quick and speedy Burns can play across the elite Patrick Peterson and perform at a high level as the Cardinals look to reach the Super Bowl next season.

The Broncos lost some of their super bowl players via free agency and look to upgrade their defense the first-round if Lynch is off the board. Spence has some off-field issues surrounding him, although the Broncos have the organization to get him on the right path. An incredible talent like Spence can become a true force in this league.

After mulling their options at No. 21 the Redskins find a trade partner in the Cleveland Browns. Redskins still get their defensive back in Alexander who is a great prospect that offers a physical talent to their defense. After not seeing many defensive backs go in the middle-first round, they decide to trade back, acquire more draft picks and take the best available defensive back to conclude the top-32 picks.