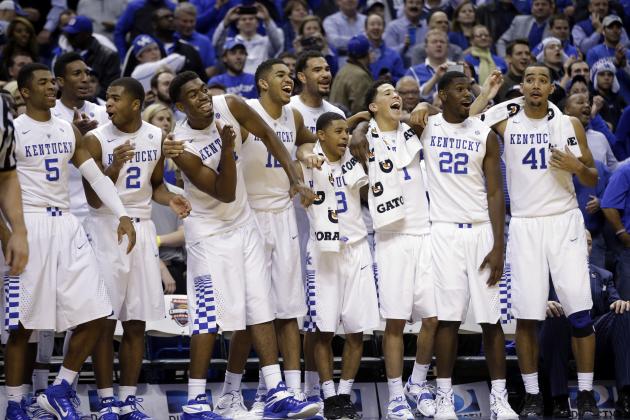 The Kentucky Wildcats were on a historic run as they went an unbelievable 38-0. Their ultimate goal of going undefeated was cut short by the Wisconsin Badgers in the Final Four. Wisconsin would later fall to the Duke Blue Devils in the National Championship game.

Karl-Anthony Towns, Willie Cauley-Stein, Devin Booker, Trey Lyles, Dakari Johnson, Andrew Harrison, and Aaron Harrison are the players that will be leaving Kentucky for the NBA. These were Kentucky’s top 7 scorers, and it is going to be a daunting task for coach John Calipari to try and replace this much talent.

This class coming from Kentucky is probably one of the most talented classes we have ever seen. It showcases 2 big men that are extremely athletic and physical in Towns and Cauley-Stein, the Harrison twins are ice-cold shooters and can take over a game, and Trey Lyles is a talented big man who can run the floor and shoot. Wherever these players land, they will improve their team to a potential playoff contender. The top two picks are going to be Karl-Anthony Towns and Duke’s Jahlil Okafor; However, Okafor has yet to declare for the NBA draft.

Coach John Calipari has gotten commitments from three top 50 players for next season in big man Skal Labissiere (Ranked No. 3), point guard Isaiah Briscoe (Ranked No. 13), and wing Charles Matthews (Ranked No. 42). Kentucky is also in the mix for the No. 4,11, and 12 players in the country, but they have yet to commit to a school. If there is any coach that can get a team of all freshmen ready to compete for a championship, it is John Calipari.

Credit all authors of images used in both article and as cover image : Caleb Luketic (CalebOnSports.com)