No team had retained the trophy since it became the Europa League; no-one in the competition’s history, had won the title a total of 4 times, and Sevilla were set on breaking this record, by winning the final against Dnipro, in Warsaw. Dnipro had never claimed a European title in its entire history, and despite being the slight underdogs in this fixture, they too would have wanted to claim victory in Poland.

Yevhen Konoplyanka started for the Ukrainian side, and with the cameras set on him for the entirety of the match, the transfer rumours about him moving to several European teams, including interest from the Premier League, including Liverpool, Tottenham and Manchester United, had to be ignored, just for one night. Carlos Bacca was also in high demand from bigger European clubs, and as he started for Sevilla, he’d scored 4 goals in 7 Europa League games – clearly the one to watch from Dnipro’s point of view.

The winner of the game, will not only get the Europa League trophy, but they will instantly gain qualification to next year’s Champions League – what an incentive.

CHANCE – Only minutes into the game, Bacca got his first half-chance of the game. As the ball was lofted towards the striker, he chested it down, and swept his left foot towards the goal, only to see his effort fly well over the bar.

7 MIN – GOAL – KALINIC – Dnipro were known for their counter-attacking, where they soak up the pressure, and then pounce, and in this instance, they have done it on the most important stage. Artem Fedetskyi played a long ball down the right wing, and onto the run of Matheus, who lofted the ball back into the box. The Blackburn Rovers loanee, Nikola Kalinic, had the ball perfectly placed on his forehead from the cross, and he headed his side in front, only minutes into the game. 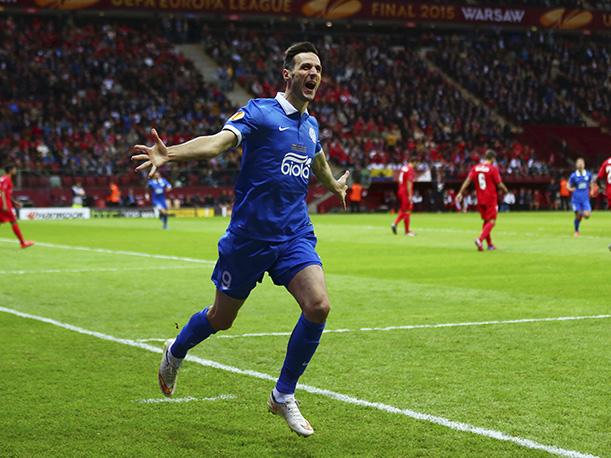 CHANCE – Benoit Tremoulinas put-in an inch-perfect cross, and found the foot of Vitolo. The Sevilla midfielder should have hit the ball first-time, but decided to take a touch, and was soon halted in his tracks in the Dnipro box.

Sevilla carved out some good half-chances since going behind, but Dnipro had to stand firm, to keep the Spanish side out. However, when the Sevilla chances broke-down, Dnipro were giving possession of the ball away far too easily, and to keep their lead intact, they would have to keep Sevilla off of the ball, and stop them from creating any more decent chances.

CHANCE – From a corner, Grzegorz Krychowiak won the first header, and forced a world class save from Denys Boyko, who tipped the chance round the post for another Sevilla corner.

28 MIN – GOAL – KRYCHOWIAK – From a short corner, the Sevilla wingers created some space to put a cross into the Dnipro box. Krychowiak was there once again, and after a great first touch, the ball was struck into the bottom corner, to draw Sevilla level. 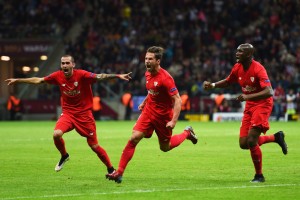 31 MIN – GOAL – BACCA – Within minutes, Sevilla were in front. Reyes worked his way through the middle of the park, and then slipped a fantastic pass onto the run of Carlos Bacca, before the striker took the ball round the keeper, and slotted the chance away. 3 minutes and 38 seconds after pulling a gaol back, Sevilla were now leading Dnipro 2-1. 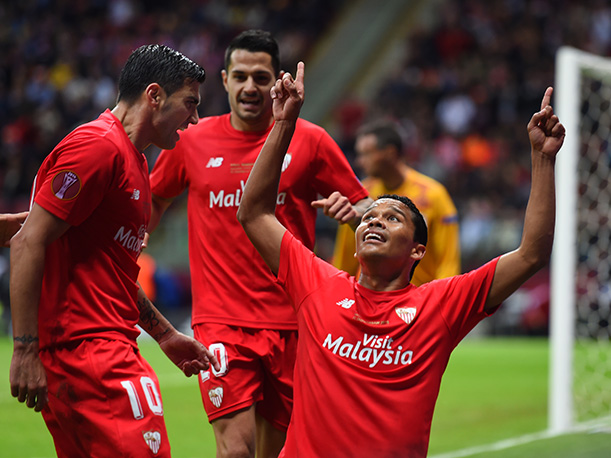 CHANCE – After a short free-kick was taken by Ruslan Rotan, and given to Konoplyanka, the winger cut-in from the left, and had a strike at goal, only to see his effort tipped over the bar by Sergio Rico.

CHANCE – As Sevilla counter-attacked, Alex Vidal came from deep, and after the ball was squared to him, he hit an effort at goal, which only whistled inches over the bar.

44 MIN – GOAL – ROTAN – Dnipro were not beaten yet. A needless free-kick was given away on the very edge of the Sevilla box, and without too much pace injected into the free-kick; the Dnipro captain lifted the ball over the wall, and past Sergio Rico. Game on! 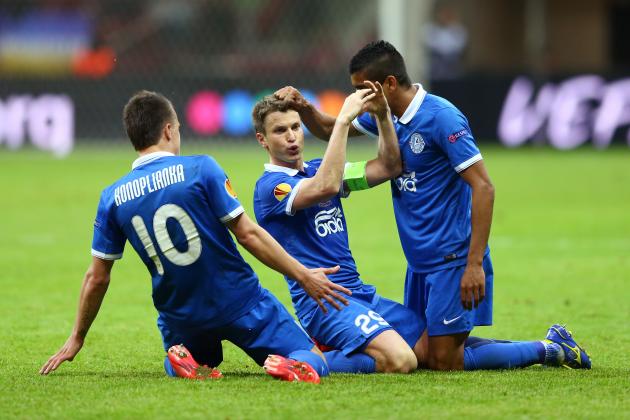 BOOKED – KALINIC – Elbowed Krychowiak from the following free-kick, and got booked for the offence.

10 minutes into the second half, both sides had started quickly, but also appeared to be a little cautious in their attacks, as they didn’t want to over-commit, and let the other side counter-attack, and have a chance at goal.

BOOKED – CARRICO – Went through the back of Konoplyanka, but the referee could have let play go on, as Dnipro were on the attack.

After both sides had been in the opposition’s half, and had their own half-chances, Sevilla had a huge case for a penalty, as the red half of the stadium went up in arms. Matheus looked to make contact with Vitolo, but on closer inspection, the Dnipro player pulled his leg away at the last minute, and Martin Atkinson made the correct decision.

73 MIN – GOAL – BACCA – Would this be the goal that made history for the Spanish side? It was a deadly finish from the Columbian striker, after Vitolo latched onto the poor clearance from Douglas, and flicked the ball through to Bacca. After the striker looked up, he hit the ball with his left foot, and watched it fly into the far corner, to put his side in the lead once again. 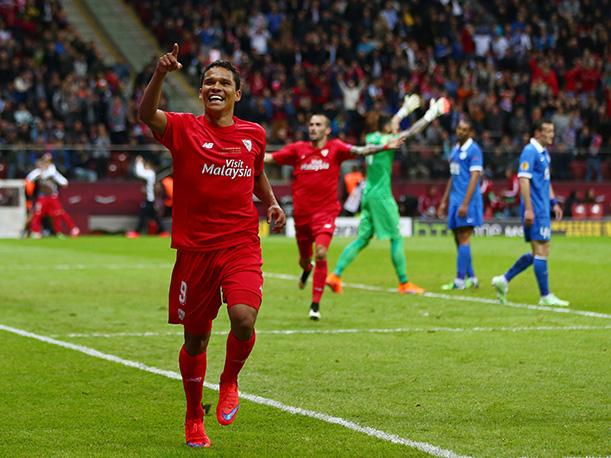 BOOKED – BACCA – Brought the Columbian flag onto the pitch, in celebration.

BOOKED – ROTAN – Pulled Vitolo’s shirt, as the Sevilla man ran away with the ball.

CHANCE – Carlos Bacca had a great chance to get his hat-trick, and extend Sevilla’s lead, when he headed the ball towards goal from Mbia’s cross, only for the effort to be saved by Boyko, and fall onto the top of the net.

82 MIN – SUB – OFF: BACCA – No hat-trick for the striker this time, but he was the clear MOTM; a top quality performance, ON: GAMEIRO

BOOKED – MATOS – Went up for a header with Alex Vidal, and elbowed the Sevilla defender in the back.

87 MIN – SUB – OFF: BANEGA – Another Sevilla player who deserved his standing ovation, as he had orchestrated almost every attack his side had created, ON: IBORRA

With only minutes until the game finished, there was some serious concern for Dnipro’s Matheus, as he collapsed to the ground, with no Sevilla player around him. The stadium went eerily silent for a couple of minutes, before the Dnipro man was stretchered off of the pitch. There wasn’t too much alarm or concern from the doctors treating the player, and both sets of fans applauded as Matheus was removed from the field of play. Minutes earlier, Matheus had attempted to challenge for a header, and it was believed to be some delayed concussion that the Dnipro player had suffered.

CHANCE – Coke was very close to putting the game to bed, as Mbia set the ball back to the right-back, yet the chance flew over.

SEVILLA WIN EUROPA LEAGUE. Sevilla retain the Europa League for the very first time, since it was renamed the ‘Europa League’, and win the trophy for a record 4th time, in the competition’s history. It was tears of joy for Carlos Bacca, as he helped his side win the fin al with 2 goals, but tears of despair for the Dnipro players, as they had come so close, yet so far from clutching the title. 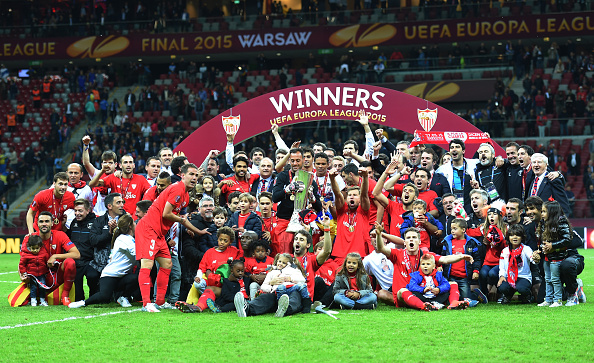 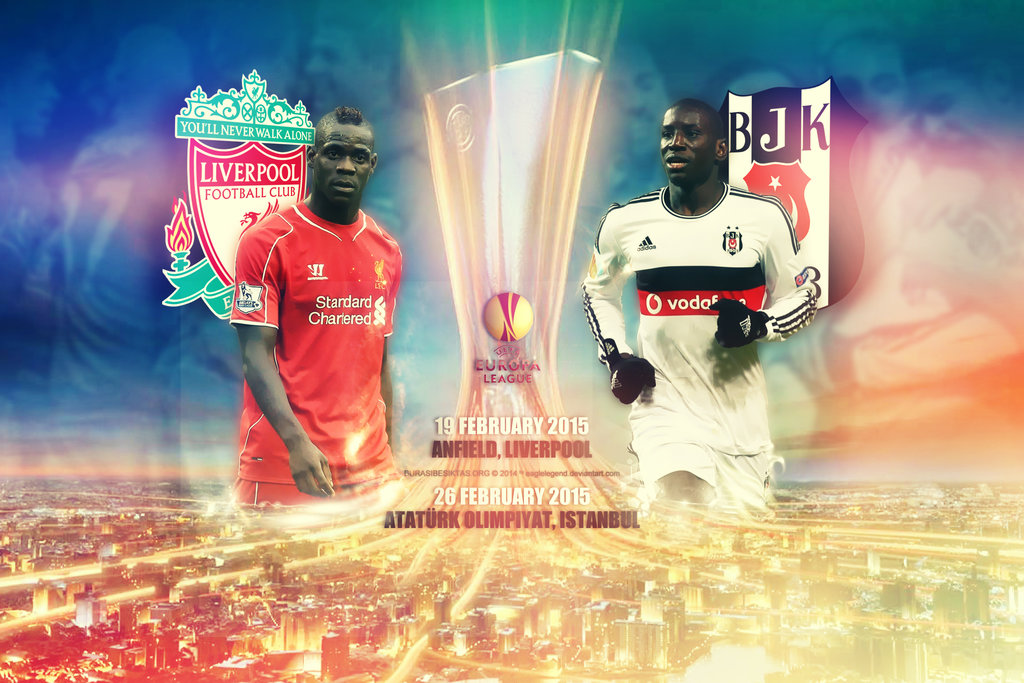 The last time these two sides faced in 2007, Liverpool set a new Champion’s league record of 8-0 at Anfield. This time, they faced off in the Europa League in a game which promised to be less one-sided, but still saw Brendan Rodger’s men as the favourites. Daniel Sturridge also made his European debut for […]