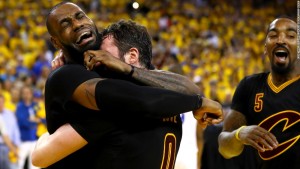 I can remember the moments as a child when I was sitting on the floor in front of the big box TV, nerf basketball in hand, watching Nance, Price, Daugherty, Phills, Ehlo, Kerr, Brandon, Hot Rod, Harper and the rest of those  late 80’s and early 90’s Cavs fill my childhood with hope and love for Cleveland basketball.  To watch my father scream and cheer at that magical TV created a passion and obsession for Cleveland basketball that would only grow over the next two decades.  It was during this era, that a basketball God, by the name of Michael Jordan had taken over the NBA, and for the first time, the world.  He captured the hearts and dreams of every basketball loving man, woman and child, with his other worldly talent.  As Cavs fans, he was the worst thing that ever happened to us.  Stacked with talent, the Cavaliers in any other decade would have competed for multiple Championships.  But for us, like most other things, we weren’t so lucky.  “The shot” will forever live in our hearts and minds.  It was that shot that crushed the dreams of so many of us.

Fast forward a decade, and I’m sitting in the high school cafeteria only to feel a buzz go through the massive hall.  This 6’8″ kid I had never seen before was surrounded by 100’s of kids clawing to get a glimpse.  Who was he?  Why was he at my school?  A talented kid from our high school basketball team challenged him to a game of one on one.  The game was over before it began. This kid who’s name was  LeBron James had walked into our school and just decimated one of our better players.  He just toyed with him. It was like watching a Lion playing with a kitten.  It was then I looked at my friends and really said ” Who the hell is this guy?”

Since entering the NBA is 2003 LeBron has accomplished more than most of us could have ever dreamed he would.  His talent, much like Michael Jordan’s, is other worldly.  He dominates on both ends of the floor, makes his teammates better, and has the uncanny ability to take his game to ridiculous new levels when necessary.  As a basketball fan, Cavs fan, LeBron fan, I am consistently shocked at his ability to be better every year.

The Cavs now are World Champions, and its largely due the fact that this kid from Akron understood what this town has gone through.  He appreciated and valued that like me, there are thousands of Cavs fans out there who have sat in front of their TV’s and gone to countless games, searching for an answers, for hope, for a lasting memory that confirmed that our passion, love and desire for greatness would culminate in eternal glory.

Lebron collapsed to the floor in tears on Sunday.  He gave everything both emotionally and physically to a town that has done the same for him,and for all our Cleveland teams for over 5 decades.  He climbed the steepest mountain, making history with a come back no one but Cleveland thought was possible.  He is our favorite son, he is Cleveland.

Thank You LeBron, Thank you