Yesterday, I took a trip to Philadelphia to see the Phillies square off against the Rockies.

My favorite part of the day, excluding the game, was going right up to the bullpen and watching the Rockies pitchers throw a quick 15-20 pitches on the mound to get loose. I was literally ten feet away from Boone Logan firing fastballs that the catcher couldn’t even see…very cool stuff. Brooks Brown was nice enough to flip me a ball, too, when he finished his session. 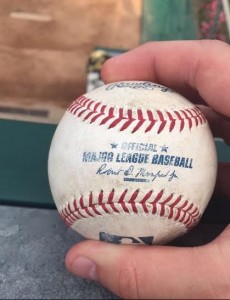 For a good portion of the game, I was feeling extremely anxious thanks to Chad Bettis, the starter for Colorado, a guy I’ve never really heard of prior to the game. To be honest, I didn’t even care for who was throwing for the Rocks. I was more excited to see Cole Hamels battle Troy Tulowitzki and Nolan Arenado. I actually predicted Hamels would toss a perfect game, jokingly, without knowing what was in store for me.

Chad Bettis gained a fan in me last night, and I’m sure many more around the globe. When he came out in the 7th sporting a perfect game, I was a believer he would finish the job and become the 24th person to ever retire 27 consecutive batters.

Unfortunately, the All-Star shortstop, Troy Tulowitzki, tarnished Bettis’s chance to go down in history on a bobbled ball up the middle. You should have seen me! I was probably more upset than some players in Colorado’s dugout. As a pitcher, I felt horrible for Bettis.

I can’t troll on Tulowitzki too much since he went deep off of Hamels twice and finished with four hits. But come on, Tulo! He makes that play easily all the time. I guess the pressure got to him.

And then, of course, the no-hit bid was ruined by Cody Asche’s routine ground ball hit against the shift that would slowly roll onto the outfield grass. Unbelievable.

Bettis would then surrender one more hit, a pop fly, just behind the 1st baseman’s head. Had Carlos Gonzalez not played in the right center field gap, he would have caught it.

For a guy who has struggled the past two years on the hill, Bettis is showing himself to be a formidable pitcher in Colorado’s rotation, now 2-0 with a 2.96 ERA in four starts.