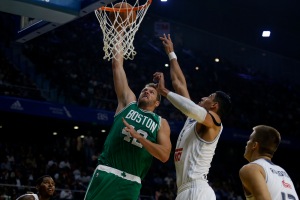 The C’s were impressive again on Thursday as they wrapped up their NBA Global Games trip with an easy 111-96 win at Real Madrid.  Although not exactly NBA competition, Real Madrid proved to be a tougher match up than Olimpiana Milano.  They do have some NBA talent and some guys that could probably play in the NBA except that they actually make more money playing in Spain.  Many of their players as well as their coach, Pablo Laso, believe that they’re actually good enough to be in the NBA.  Commissioner Adam Silver, who was in attendance at the game and was interviewed by Abby Chin, said that Laso actually told him before the game that he thinks they would fit in well in the Eastern Conference.  Of course Silver said the NBA isn’t quite ready for that, but it was clear that these guys think pretty highly of themselves.

They made this known in the first quarter when they gave the Celtics all they could handle and sent the message that they fully intended on winning, unlike Olimpiana Milano who seemed like they were just happy to be playing against an NBA team.  They played solid defense and forced the Celtics into 6 turnovers in the first quarter.  The C’s ended the quarter leading by a slim 25-23 margin.

Boston turned up their own defense in the second quarter, a quarter in which Real Madrid shot only 33% and committed 7 turnovers.  The Celtics headed into halftime with a 54-43 lead.  Standout performances in the first half included David Lee with 8 points, 6 rebounds, and 2 assists as well as 12 points from Avery Bradley and 10 points from Isaiah Thomas.

The Celtics ran away with it in the second half led by 8 third quarter points from Jae Crowder as well as rookie Terry Rozier’s 12 points and 3 assists in the fourth.

David Lee continues to show that he’s still one of the best power forwards in the NBA.  He wasn’t feeling well Thursday morning and was unsure if he was going to play, but he looked just fine as he grabbed a double-double with 13 points and 11 rebounds to go along with 4 assists and a steal in 21 minutes.

Avery Bradley scored 17 points and is 7-8 from three so far in the preseason.

Terry Rozier showed us what he’s capable of.  He shot 6-8 from the field and finished with 14 points, 4 assists, and 2 steals in 16 minutes.

Despite coming off the bench, Isaiah Thomas led the team in minutes tonight (25).  He had 15 points, 4 rebounds, 3 assists, and a steal.

Jared Sullinger only played 11 minutes but he was effective with 7 points and 6 rebounds.

Jae Crowder had a team-high 6 assists to go along with 8 points and 4 rebounds in 22 minutes.

Brad Stevens decided not to do any experimenting with the starting lineup as he went with the same group that took the floor in the Olimpiana Milano game. (Smart, Bradley, Crowder, Zeller, Lee)

The Celtics will now travel back to the states but won’t have another game until they take on the Nets in Brooklyn on Wednesday.  Tip-off is at 7:30.