Can the Spurs Legacy Continue?

Entering the Finals last summer, the Miami Heat were the obvious favorites to capture their third consecutive title. But after the effects of a cramping Lebron James, and an AC malfunction, that plan became altered. The Spurs would eventually come out victorious in their conquest for a fifth title. With all starters returning, the Spurs became the logical choice to repeat. 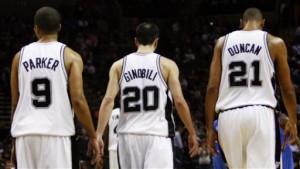 A year later, Chris Paul and the Clippers would shatter the hearts of many Spur fans around the world. After the 111-109 defeat, it became evident that drastic changes were needed. Various issues surrounding their lack of post presence, and inconsistent scoring needed to be addressed. The Spurs has always been looked at has championship contenders, but will this be the end of the Spurs Dynasty?

The defeat left many questioning the future of the organization, and the likelihood of them capturing another title. As the organizations three superstars Tim Duncan, Manu Ginóbili, and Tony Parker near the end of their historic individual careers, the time is now to plan for what’s ahead.

Duncan, behind the contribution of Parker and Ginóbili has been able to single handily transform the Spurs into a dynasty. Winning five championships, and a handful of individual accolades between the three, it’ll be difficult to replace the legacy these three have assembled.

However, Duncan is up for free agency in the off-season, and the Spurs should be confident that he’ll be ending his legacy in San Antonio. Despite Duncan’s age, his effectiveness on the court has been efficient throughout both the regular and post season, this can be an added contribution to the team’s success.

We’ve also been granted the opportunity to experience Argentina hometown hero. Ginóbili has earned the respect of many all over the world. His swift and precise moves on the floor; to go along with the warm smile he’ll display when he sets up a teammate, will be a sight we’ll all miss when he decides to retire.

Although Ginóbili’s play hasn’t been what we’re accustomed to seeing, he’s still playing at a high level. Being hindered all season by injuries, the organizations spark off the bench was still able to maintain his average. The organization is confident that the 14-year veteran will continue his career as a Spur.

The most critical piece for the lineup throughout the years has been the play of Tony Parker. The 2007 Finals MVP continues his rank has a prominent figure in basketball. With Parker still relatively young, the Spurs should continue to add depth around him to limit his role. 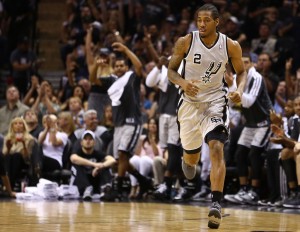 As questions gather regarding the future of the three superstars, the Spurs should consider the upside of their 2014 Finals MVP, Kawhi Leonard. The forward from San Diego State made a name for himself during their last two championship appearances. Leonard has proven that he can be reliable on offense, and a hassle for opposing players.

Danny Green, the unsung hero for the Spurs in the 2013 championship series has also made an impact on the roster.  With his field goal percentage hovering just above 50%, the Spurs threat from the three-point line has been able to come up big when he’s been called upon.

Green is another player that’ll be up for a contract extension in the off-season, and being a player of his caliber, the market will open him up to a variety of teams.  For the organization to have continued success, and build around Leonard, the resigning of Green is essential.

To replace Duncan’s interior presence, the Spurs will have an assortment of players to choose from once they become available during the off-season. One player who comes to mind is LaMarcus Aldridge. The Texas native will explore all options during the free agent signing period, and San Antonio will be the perfect destination to chase that elusive title. 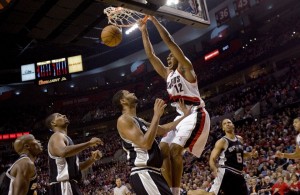 Aldridge has been an All-star in his previous three campaigns, and expectations for him have grown. His host of post moves to score over, and around defenders will be just what the Spurs need pushing forward. The signing of Aldridge will give him just enough time to develop the missing aspect of his game from none other than Duncan.

With strategic planning, and ample cap space available during the off-season, the Spurs can become a well-defined team.  Although it’ll take time to develop chemistry between the newly added pieces, it won’t take that long. Coach Greg Popovich has a towering resume regarding molding players, and Aldridge will be no exception.

Similar to previous dying franchises before them, it won’t be hard to replace the beloved stars on paper; however, it’ll be extremely difficult rewriting the legacy that the three superstars have created. The images they’ve tattooed not only on Spur fans, but fans around the world will be replayed for generations. The Legacy created throughout the years has been appreciated from former and current players. The Spurs mastery and effective play on the floor will continue to dominate the league, for seasons to come.

Credit all authors of images used in both article and as cover image : Justin A. Hill