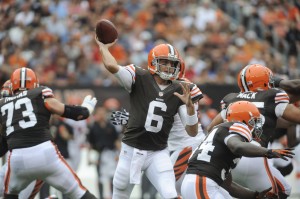 The Browns victory this weekend marked the beginning of a new era in Cleveland.  It wasn’t a fluke victory over one of the best offensive teams in the NFL, but instead a team victory that took the best efforts of the offense, defense and coaching staff.  Although there were glaring needs for improvement, especially in the coverage against the Pro Bowl tight end Jimmy Graham, who was able to get open almost every play in the second half, the Browns worked together to shock the NFL world and beat the Saints.  Now, with a 1-1 record, the fan base has a competent quarterback leading this team and a coaching staff that so far has shown good decision making and clock management.  The bottom line is Cleveland has hope again and its new and exciting feeling to have after a decade and a half of inconsistency.

Credit all authors of images used in both article and as cover image : thebiglead.com