CANTON,Ohio- What do you know! We’re pretty much half way through the 2016 NFL season. Due to some time constraints, I’m making my predictions for week 8 by way of an article. So let’s get started.

Jaguars vs Titans- My Pick- (Titans)- Winner- Winner- (Titans): I know, it’s way past Thursday but Tennessee seems to be rolling in the right direction.

Redskins vs Bengals- I’m taking Cincinnati because they are the better team and the game is in Cincinnati.

Chiefs vs Colts- I’ll take Kansas City on the road.

Cardinals vs Panthers- A rematch of the NFC title game. The result? Not Carolina. Arizona gets it done on the road.

Raiders vs Buccaneers- The Raiders stay undefeated on the road.

Lions vs Texans- Houston is at home. That’s my only reason for taking the Texans.

Patriots vs Bills- Buffalo shut out New England in their first meeting. The Patriots get revenge.

Chargers vs Broncos- I think San Diego will shock Denver and get a road win here. Keep in mind, no more C.J. Anderson, who’s out for the year with a knee injury.

Packers vs Falcons- I’ll take Atlanta in the dome.

Eagles vs Cowboys- In this battle of the NFC East, I’ll take Dallas to win at home.

Vikings vs Bears- Minnesota gets back in the win column with a road win over an NFC North rival. 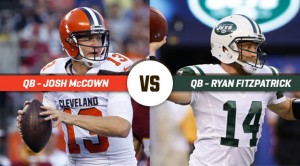 The New York Jets invade FirstEnergy stadium Sunday afternoon. The Browns are the only winless team in the NFL. Quarterback Josh McCown will be the starter and he may want to get some revenge on the Jets after last years meeting when New York knocked him out after McCown went soaring into the endzone.

Ryan FitzPatrick was benched last week but Geno Smith is now out for the year. I’m sure he’ll want to prove himself yet again.

New York is missing Eric Decker but they still have options on offense. Their defense up front is one of the best.

Cleveland has a bad offensive line and our defense, both the secondary and up front, are bad. We have a good kicking game again finally though.

Unfortunately, the Cleveland Browns are going to fall to 0-8 unless the Jets have a bad day on defense and FitzPatrick has a bad day as well.