CANTON, Ohio- The Cleveland Browns have finally moved on from cornerback Tramon Williams and quarterback Josh McCown. I’m glad they let go of Williams, his best years are far behind him. Cleveland tried hiding him last year by using him in their nickel package on defense, but injuries forced them to play Williams opposite Joe Haden. I love this move, because now this will give a younger defensive back a chance to start and don’t forget, Cleveland signed Jamar Taylor to an extension to play opposite Haden. Right now, the Browns can’t depend on Haden staying healthy for an entire season. With that said, Taylor would assume his role, which would leave a gap at the other starting CB position. This is why I wouldn’t be shocked if Cleveland takes the best available CB at #12. 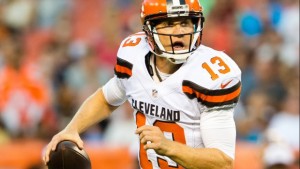 Josh McCown, along with Tramon Williams, was released by the Cleveland Browns.

Now, let’s talk about Josh McCown. I have nothing bad to say about the man. He is excellent for any locker room and has great qualities both on and off the field. Unfortunately, McCown isn’t good enough to even be a backup QB in the NFL. Josh has dealt with a lot since joining Cleveland two years ago, and has been a pros pro in every faze. He’s tried helping out countless QB’s while being flipped flopped between the starters role and the injury report. At the end of the day, this is a good move for both parties. Josh McCowns agent contacted the Browns and thanked them for releasing him now, so that Josh will have a chance to make another teams roster.

So, now Browns fans sit back wonder, will Robert Griffin III be next? From everything I’m reading, Griffin is not in the future plans for Cleveland. The Browns must make a decision before March 11th, which is when Robert will be due a roster bonus of $750,000, if he is still on the team. I expect Cleveland to release RG3.

Cody Kessler will be entering his second year of his rookie contract. Browns head coach Hue Jackson became frustrated with Kessler’s lack of aggressiveness for throwing the ball downfield last season. I’m guessing that Kessler being drafted was the choice of Sashi Brown and company. Not Hue Jackson. I think Jackson agreed to give them the decision on drafting Kessler, if Jackson could bring in RG3. Well, we seen how that turned out. And yes, I admit again, I recommended signing Griffin. I used poor judgement, but to my defense, neither Griffin or any other QB’s on this roster had much help of any form.

The release of McCown makes me think more and more that Cleveland is indeed going to make a play for Jimmy Garoppolo. If Griffin is released, I’ll be almost certain that Cleveland is going to trade for Garoppolo. So, that means I have to get used to typing his last name correctly and stop allowing auto correct to fix my mistake of miss spelling his name. I guess it would help if I slowed my typing down a bit to.

We all know that Cleveland is going to draft a QB at some point in this draft. The question is with what pick and who? I’m still completely against drafting a QB with the #1 overall pick. I’d rather take care of the surrounding positions and go into camp at the end of July with Kessler, a free-agent QB and a drafted quarterback. Then the Browns need to hope for a much-improved offensive line to keep the quarterbacks healthy. It would also help if the QB’s can get some help with a solid running game. Yes, that means the Browns offensive line also needs to improve with their run blocking.

In regards to Garoppolo, I don’t want to repeat myself from a previous article that I wrote last week. The more I think about trading for Garoppolo, the more I’m in favor of it. But, only if Cleveland keeps the first overall pick along with the 12th overall pick in the first round. After that, I’m ok with giving up one of the two first round picks. If you or anyone else can talk me out of it, then be my guest.

I understand Cleveland needs a lot more than just a good quarterback, but at some point, the Browns are going to have to give some one that chance. I do not think Kessler has the physical skills to be the guy, especially in the AFC North. I also know that Garoppolo has only played 6 quarters of NFL football and has to prove he can stay healthy. An offensive line that has been very shaky won’t help. But again, Cleveland, at some point, has to start with someone.

I told a friend of mine the other day, that this is the most important off-season and draft in the history of the Cleveland Browns. In the past, I’ve said that, but never before has the team been in the situation like they’re in now. Coming off a 1-15 season and having drafted so many rookies in last year’s draft, the Cleveland Browns will have to hit in free-agency, but just as importantly, maybe even more importantly, they’ll have to have one of their top drafts in team history. Unfortunately, I do not have faith in the front office. I only have faith in Hue Jackson, because he’s a football guy. Sashi Brown and the rest of the front office have a lot of proving to do, for me to have faith in what their decision making. The book is still out on this front office for me.