CANTON, Ohio- We are now into the middle of May in this 2017 MLB season. For the Cleveland Indians, they’ve been solid defensively, but not great. Offensively, they’ve also had their struggles.

In 36 games, the Indians have committed 21 errors. That ranks 14th in MLB. Cleveland has a problem right now in center field. Lonnie Chisenhall is not known for playing center field, and it has shown. Chisenhall has played mainly right field. In right field, Lonnie has played well defensively. Playing in the corner outfield, you have less yard to cover. In center, you have more yard to cover and your first break on the ball once it’s hit is crucial. If you’re off by even a step, it can cost you. Also, you’re not dealing with the wall to your side, but rather playing where the wall is at behind you. If you get lost tracking the ball and take your eyes off of it, that can cause serious problems. I’m not here to bury Chisenhall, I think he’s a good right fielder and plays the ball well off the wall and that usually prevents runners from hitting for a double or Lonnie has a good shot at throwing the runner out at second base.

Chisenhall is batting .275 right now. Do the Indians have a better option to play center field? Or, do they keep playing Chisenhall in center in hopes that he improves defensively at that position and leaves right field to Almonte and Guyer? Austin Jackson has played well, when he’s healthy. Right now, he’s on the D.L. but Cleveland hopes to get him back soon. The Indians aren’t asking Jackson to hit .300. Just do well in center field and have a decent average at the plate. Again, I ask you, would you rather keep Chisenhall there and wait for him to improve? Or stick Almonte in center? Right now, I’m not even sure.

Back when Cleveland allowed Rajai Davis and Mike Napoli to walk, they knew they’d be taking a hit defensively at two positions. The first position was already mentioned above with Davis not being in center field. The second position was at first base. Cleveland elected to let Napoli walk and signed Edwin Encarnacion. So, in other words, the Indians wanted more offense. So far, Edwin has mainly been strictly the Indians DH. The Tribe has elected to go with Santana at first. When I first knew about this, I’ll admit, I shuttered. Now, so far, this season, Carlos Santana has committed two errors. That’s not bad for someone who has never been viewed as a defensive player. For the record, Lindor leads the Indians in errors with 3. You could say that Santana could improve offensively, I can’t argue that. But, in the final game of a three-game series with the Minnesota Twins, Terry Francona made a lineup change. And it looks like it might have worked. Kipnis, who was batting in the four hole, was pushed up to the lead-off position. Then, Santana was dropped down to the fifth spot. Jason Kipnis hit two home runs and drove in 4. Santana Also hit a home run up into the bleachers. 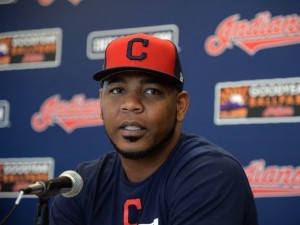 With that little bit of a lineup change, Cleveland scored 8 runs off 13 hits. What’s next for the Tribe? When will Edwin start to get hot? It’s still a little early and Encarnacion has never been hot out of the gate. He usually starts out slow. But, once he starts to get hot, this lineup will be extremely tough to pitch to.

I hope very few people are freaking out over Danny Salazar and his rough start. Salazar has been the victim of leaving too many pitches up and in the zone, and the hitters are taking advantage of that. This is the big difference between pitching in the minors as compared to the big league. The hitters are just that much better. Salazar has the most strike outs on the team with 53, but he’s had innings where he’s giving up multiple runs. Danny can’t seem to avoid those big innings. With the 53 strike outs, Salazar has also walked the most batters on the team with 18. Walks can get you into big trouble fast. I’m not freaking out over Salazar’s pitching woes. He’s too good of a pitcher to not settle down and be right under Kluber and Carrasco. Salazar just has to do a better job of keeping the ball down and either in or away.

I already know I mentioned the tweak to the lineup. I hope this is a sign of a more consistent offense that will score 5 or more runs a game. Cleveland has the hitters to average 5+ runs a game. Again, hopefully this lineup change did the trick. It’ll obviously help once Edwin gets going, especially with runners in scoring position.

I know I might take some heat about this, but I still prefer Trevor Bauer in the bullpen. He’s had plenty of time to develop a short-term memory and move on from a hit or home run. The only pitcher I can think of to put in Bauer’s spot is Mike Clevinger. I’m not sure if he’s ready to be in that situation. I’m curious as to how many more chances Francona will give Bauer before he makes a change, IF he makes a change.