CANTON,Ohio- We are closing in on Two weeks until training camps open for some NFL teams with others waiting a day or Two later.

I thought it would be fun to list my top 10 of running backs in the NFL. This list may or may not include rookies. You’ll have to read to find out.

This list is based on the most complete backs. That includes their running ability, pass catching and blocking.

#10- Jonathan Stewart Is more of between the tackles runner. That means he’s more effective running through his linemen as opposed to running outside towards the sidelines. But he is capable of doing some damage on the perimeter. He’s a good blocker with his size and can be used to catch the ball in the back field and run with it. 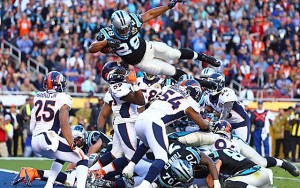 #9- LeSean McCoy-Buffalo Bills- He wasn’t even ranked in the top 10 last year. But if he can manage to stay healthy, he’s very capable of being the back he was in Philadelphia. McCoy is at his best when he can get to the outside or in the open field to use his size and speed. LeSean can also pick up a block and can be dangerous when catching the football in the backfield. McCoy will be asked to take on even more of the work load in 2016 with the Bills uncertainty at quarterback. 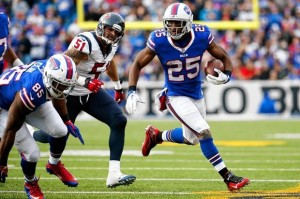 #8- Latavius Murry- Oakland Raiders- Murry really helped out QB Derek Carr last year by taking on a good chunk of the work load. He can really do damage whether it be up the middle or on the outside. Good blocker and good with catching the ball in the back field. 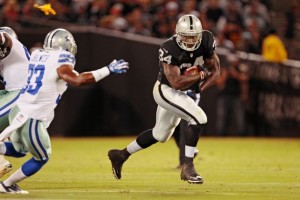 #7- Ezekiel Elliot- Dallas Cowboys- Shocked? I know. Never played a down in the NFL yet. This might show you how confident I am in the former Buckeye star running back. Elliot has great vision, patience and speed. I forgot to mention the ability to block and catch the ball out of the back field. He’ll be a big reason why Dallas wins the NFC East this year. 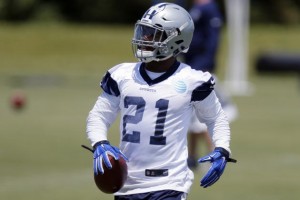 Ezekiel Elliot will take a decent amount of workload off of Tony Romo. 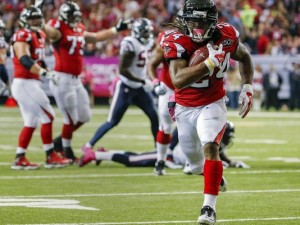 #5- Le’veon Bell- Pittsburgh Steelers- I didn’t view him as a top 10 back until last year. He’s crucial to the Steeler offense that will break some offensive records this year. Pittsburgh likes to use him more as a receiver in the backfield but he’s just that good in every aspect of whats expected out of a running back. 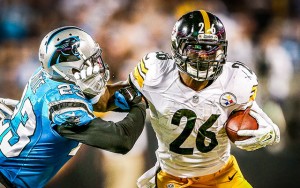 Le’veon Bell wasn’t even ranked in the top 30 in rushing (37th) in 2015. A lot of that is because of Pittsburgh being a pass first offense and his little two game suspension.

#4- Chris Ivory- Jacksonville Jaguars- Ivory has been in the league for awhile now by running back standards, but he’s been very consistent. I think his departure to Jacksonville will hurt the Jets. Ivory has been a very productive player and defenses to have to prepare for him. Really good all around back. I know Blake Bortles is a happy man as the QB for the Jaguars. 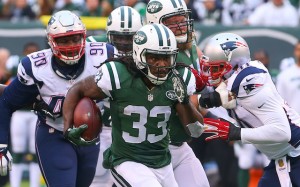 Chris Ivory-Jacksonville Jaguars- Ivory ranked 5th in rushing in 2015 with 1,070 yards with the New York Jets.

#3- Doug Martin- Tampa Bay Bucs- All the hype was surrounding Trent Richardson in this draft. Yet, Doug Martin was picked 31st out of Boise State. Trent only has 1 more shot at making an NFL roster in Baltimore while Martin has done a great job down in Tampa. Excellent all around back. 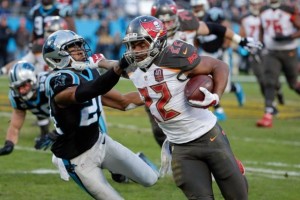 #2- Todd Gurley-Los Angeles Rams- After watching him at the University of Georgia, I had a great feeling about what he was capable of when his time came in the NFL. Gurley has not disappointed anyone. Awesome all around back. Now if rookie Jared Goff can just play well, I have the Rams making the playoffs. 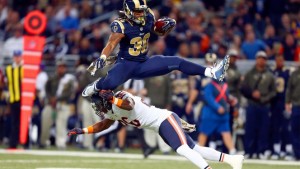 Todd Gurley-Los Angeles Rams- Finished Third in the NFL in rushing in 2015 with 1,106. Keep in mind, he missed some games due to injury

#1- Adrian Peterson- Minnesota Vikings- Yes, he’s over 30 which is frowned upon in today’s NFL, but AP stays in great shape and loves to be the best. As the best running back in the NFL, there simply isn’t anything he can’t do. If QB Teddy Bridgewater can just be a good quarterback, the Vikings should challenge Green Bay for the NFC North. I’m pretty sure Bridgewater sleeps well at night knowing he has the best running back in the NFL to hand the ball off to. 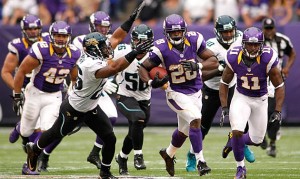 Adrian Peterson-Minnesota Vikings- “All day AP” is what he’s called by not only fans but players and coaches throughout the league. Peterson led the NFL in rushing in 2015 with 1,485 yards. In 2012 he rushed for 2,097 yards on 348 carries. Simply unbelievable.

So there you have it. My top 10 running backs. I know some of you may be a little upset about Ezekiel Elliot being in there but I already feel he’s that good.