CANTON, Ohio- I don’t believe anyone could really understand how excited I was when the trade for Kyle Korver went official. At the beginning of the season, for the last two seasons, I wanted Cleveland to try and convince Ray Allen to sign with the Cavs, just for his shooting from beyond. Yes, I know, Ray Allen can’t play a lick of defense. Kyle Korver is now in 7th place for 3 pointers in NBA history with his performance Wednesday night, passing Jason Kidd. I’ve always liked Korver and have felt he can single handedly shoot another team into submission. That’s exactly what happened last night at Indianapolis. Just when the Pacers were trying to make a run in the fourth quarter, Korver just kept dialing up from deep. Korver finished with a season high 29 points. Kyler only missed 1 three-point shot.

Last night is exactly why I wanted the Cavs to get Korver. They made it happen, thanks to Atlanta’s GM being in the state of mind that the Hawks aren’t built to beat the Cavaliers in a playoff series. But, Korver has also shown his ability to pass and play good defense at times. Sure, he’s had some bad moments on defense, but at least he can play defense.

Cleveland has now signed former first round, second overall pick Derrick Williams to a 10-day contract. Yes, this is the Williams that was picked right after Cleveland selected Kyrie Irving #1 overall in the 2011 NBA draft. The Minnesota Timberwolves selected Williams second overall. Cleveland will be Williams’ fifth team. I have zero problem with this. Derrick Williams is expected to play Thursday night at Oklahoma City. While I’m not expecting him to last longer than his 10-day contract, this is a low risk for Cleveland. The Cavs are in need of depth at the wing position. Derrick Williams is 6’8 and maybe knowing he’s on a team that is playing to win a title will bring out the best in him. Williams is a good defender that has the ability to score. Unfortunately, for him, Cleveland has a bigger need for a backup PG and a legit center. Time will tell. 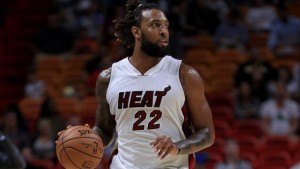 The NBA’s trade is February 23rd. Also, keep in mind, players must become free-agents by March 1st to become eligible for the playoffs with a new team.

There are tons of rumors circulating around the Cavs right now. One thing I can promise you. Cleveland is not going to trade Kevin Love for Carmelo Anthony straight up. It’s just not going to happen. And since this an opinionated type article, let me say this. I’ve been saying for at least 3 years, that Carmelo Anthony isn’t even a top 10 player anymore. Now, he’s not in my top 15, maybe even 20. Kevin Love can score, pass, rebound and play a little defense here and there. Anthony? He can score, but that’s really it.

The only thing I see happening is minor additions to the team. Now, don’t get me wrong, Cleveland still needs to get back to playing defense and stop allowing so many teams to score 100 points a game. The days of allowing teams to score 60 or more points in a half will have to come to an end. Just remember that it’s still February, James and Irving are playing too many minutes, J.R. Smith won’t be back until the end of April and as far as I know, there are multiple GM’s that are wanting to make a deal with the Cavs for Chris “Birdman” Andersen. His contract would come off their books at the end of the season, which is why they’d want it. That kind of move would open up a roster spot for the Cavs.

The three names I keep hearing about that interest the Cavs are Jose Calderon of the Lakers, Deron Williams of Dallas and Jameer Nelson of Denver. Keep in mind, Cleveland doesn’t need a star to backup Irving. Just a player that can run the offense, pass the ball and allow Irving and James to rest and not have to play the PG role.

As far as the center position goes. The only two names I keep hearing about are Andrew Bogut of the Mavericks and Tyson Chandler of the Suns. I personally like Chandler just a bit more, but I’d be fine with either of the two.

Cleveland is hoping that they can swing a trade using one of their trade exceptions for one of the point guards. In terms of the centers, both Chandler and Bogut could be bought out by their respective teams. This would allow them to become free-agents and then Cleveland could offer them a deal. Obviously, Cleveland can’t offer much, but for both players, the chance at winning a ring at this point in their careers means a lot more because they know they won’t be able to make much more than what the Cavs will offer anyway.