CANTON, Ohio- I want to begin a position by position breakdown of the 2017 Cleveland Browns. After experiencing their worst season (1-15) in franchise history, the Cleveland Browns added both through the draft and a few free agents.

THE DEFENSIVE LINE AND LINEBACKERS:

I wanted to start out of the gate on what could be two strong positions for the Browns. Last year the Browns only totaled 26 sacks. That ranked 3rd from the bottom of the NFL.

In a pass happy league that is the NFL, having a good or great pass rush is extremely important. Having a strong pass rush can make an average secondary or sometimes a mediocre secondary, look a little better than they actually are. When you can force a QB to throw the ball too early or make him throw the ball under pressure, the secondary can take advantage of that.

In this past draft, Cleveland selected defensive end Myles Garrett out of Texas A&M. Defensive coordinator Gregg Williams was brought in to bring attitude and accountability to a defense that had neither of those in recent years. Garrett is expected to be the corner stone of this defense. Myles has had injuries in the past, Browns fans hope they don’t stay consistent. If Garrett can stay healthy and live up to his hype, the Browns will have a force on the line. 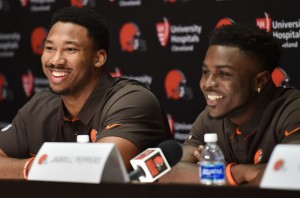 Cleveland will switch back and forth between the 3-4, 4-3 and even play some 2-5 from time to time. For those wondering, a 2-5 is two defensive linemen while dropping back 5 guys back into coverage. But, to confuse the quarterback, you can also still rush 1 or more of those 5 players that you dropped back.

Danny Shelton and Emmanuel Ogbah look to have another impactful season. Jamie Meder, who helped Cleveland avoid the dreadful 0-16 season, should see more playing time. Cleveland also drafted Larry Ogunjobi and Caleb Brantley who, if he keeps his head on right and makes football his focus, could become a real force on the defensive line. Desmond Bryant will be back and hopefully Carl Nassib will play a full season like he did the first half of last year.

Cleveland doesn’t have a horrible linebacking core for once. At least on paper. The Browns brought back Jamie Collins to anchor the linebacking unit. Collins will play alongside a solid linebacker who has impressed me since his rookie season. That would be Christian Kirksey. Christian is a great sideline to sideline LB. Joe Schobert will have to play better this year. The book is still out on him, but I have to keep in mind that this will only be his second year in the NFL.

Tank Carder and Nate Orchard are the backups behind Kirksey and Schobert.

Although he’s listed as a safety, I think you’ll be seeing rookie Jabrill Peppers play a little bit of linebacker when Cleveland goes to more of a 2-5 defense. Peppers is a good tackler and plays with a lot of passion. Those are the two main reasons I was happy Cleveland drafted him. He will fit right in with this city and the Browns fans. Peppers will be the emotional leader of this defense sooner rather than later, just because of the type of player he is and personality he has.