Brock Osweiler is still on the Browns roster. So, while many people think Osweiler is no good and he has no business being a starter in the NFL, I’m going to bring up some points.

This brings me to Cody Kessler. I don’t see Kessler as a starter in the NFL. I think he can be a good backup QB, but then again, maybe he comes out in training camp and proves otherwise. Kessler had two problems last year. The first being his unwillingness to throw the ball deep down the field. That did not go over well with head coach Hue Jackson. The other? Cody was afraid to throw interceptions. So, he played it safe and never took any chances. In the NFL, you’re going to have to take chances. It’s that simple. You can’t be afraid to throw an interception. If Kessler can improve in those areas, he’ll have a chance to win the starting job. 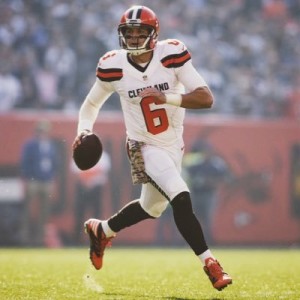 Cody Kessler didn’t post great stats last year, but he took care of the ball and played through injury.

Cleveland drafted Deshone Kizer in the second round. Notre Dame had a down year last year, so of course all the blame goes towards the QB. I like that the draft experts pointed out that the Fighting Irish lost some really good players to the draft two seasons ago, Notre Dame’s record showed that. I’m hoping that Kizer either, won’t have to play a down this year because Kessler or Osweiler will stay healthy and productive or Kizer looks so good during training camp and pre-season, that Hue has no choice but to start him. I don’t want Kizer being forced into play due to injuries. Cleveland invested a lot of money into rebuilding the offensive line, hopefully that pays off.

How does all this talk effect next year’s draft? Right now, there are four quarterbacks, according the experts, that are expected to go in the top 10, possibly top 5. Sam Darnold of USC (6’4-225). I liked what I seen out of Darnold from what I seen of him. Josh Rosen of UCLA (6’4-210). I haven’t seen him play yet. Luke Falk of Washington State (6’4-205). Again, I haven’t seen him play. And finally, Josh Allen of Wyoming (6’5-222). Yes, they play football in the state of Wyoming. I have yet to see this guy play as well. Here’s the deal. No one on this earth knows if any of them are the real deal, but there will be four teams that take a chance on them, in hopes that they are a franchise QB.

Either Kessler, Osweiler or Kizer emerge as “The guy” and the Browns are convinced that one of the three can help lead them to winning a title in the next 3-5 years.

Just my opinion, but it’s highly unlikely that either emerge to that type of status. Next year, the Browns will have the draft picks to trade up, unless they only win 1-2 games in 2017 and are already in position to take one of those quarterbacks. Wouldn’t it be nice to already have that guy you know is your guy under center and you can take the best player available instead of a quarterback?