CANTON, Ohio- The NFL draft is still pretty far away. It’s actually 111 days an counting, if you’re counting at home, which I am. We’ll have pro days, private workouts and the actual combine before the draft gets here. Of course, it’ll all be over hyped as usual. Why? Because the NBA’s regular season is too boring, unless your team is actually winning, and we have nothing else to do as die-hard sports fans but to try and predict what player or players that, not just our teams, but other teams, will pick with their higher picks. Perhaps, you should get a hobby, maybe checkout a Cafe 80’s show and make some friends.

Ok, so all kidding aside, while I have other things to do, I have been looking at different players. It’s time to play that game called “being honest”. Now there’s obviously a need at quarterback for the Cleveland Browns. Then again, half the league needs a good quarterback. From everything I’ve read and watched, it’s easy to see and understand how the so called “experts” are giving these QB’s such high ratings.

To me, none of them are worth the #1 overall pick. I’m not so sure their ready to be franchise quarterbacks anytime soon. I hope the Browns do not take a QB #1 overall.

You’ll have Watson from Clemson, Trubisky from North Carolina, Kizer of Notre Dame and, even though he’s not in the draft, Jimmy Garoppollo, the backup in New England. 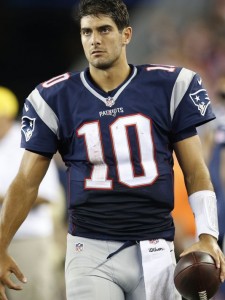 Jimmy Garoppolo would be too expensive and risky for the Browns.

Question for you. What good is any quarterback if he has no protection? Cleveland has one of the worst offensive lines in football. Now, I will admit that injuries took a toll on the Browns line. That simply cannot be ignored. I’m not one to make excuses, but the Browns were using guys on the offensive line that probably shouldn’t be in the league. If they’re in the NFL, they’re only good enough for the practice squad. Joel Bitonio will be back at left guard. He’s a pro bowl caliber offensive linemen. John Greco is a solid right guard. He’s not a pro bowl linemen, but he gets the job done. Austin Reiter will have a chance to show if he’ll be able to be the starter at center. Cam Erving has shown he can’t handle being the center. Cleveland gave him a chance at right tackle in Pittsburgh in the final week of 2016 and, as I wrote a week ago, Erving showed he might be able to handle being Cleveland’s right tackle. Then there’s Spencer Drango, Austin Pasztor, Alvin Bailey and Anthony Fabiano left on the board.

My point to all that, is that the offensive is still a mess and we can’t stick a QB back there that we want as our future quarterback if he’s going to get injured. My problem is that I don’t know how the Browns should handle the quarterback situation. I do think they need to draft a quarterback, but not in the first round.

A week or so ago, I wrote about how the Browns switching to more of a 4-3 defense which I welcomed with open arms. I also brought up how that changes the draft for Cleveland.

I keep hearing Myles Garrett as the top overall pick. He’s a pass rusher that the Browns need desperately. He could be a game changer. I still can’t talk myself into taking Garrett #1 overall. I understand that Cleveland needs pass rushers. But here’s another thought. How about drafting a guy that will cause problems from a rush defense stand point and might be able to get pressure on the QB.

I still think the Browns are best fit to draft Jonathan Allen out of Alabama and put him next to Danny Shelton. 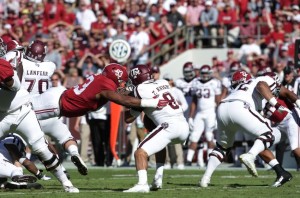 Jonathan Allen could help create a solid defensive line for the Cleveland Browns in 2017 and longer.

Think about how bad the Browns have been when it comes to stopping the run since they came back? Really bad.

Now with that #12 overall pick, I really like Reuben Foster, who is also out of Alabama. My problem with drafting Foster is the fact that he is a middle linebacker. Christian Kirksey plays that position as well. I’m not sure if either of the two players can play outside linebacker.

I also love the idea of taking Malik Hooker or Jabrill Peppers. The safety position is a mess and Cleveland needs play makers on defense badly. Malik Hooker from Ohio State is a true safety, but Peppers can play multiple positions and can return kicks if needed.

I had an idea the other day, but I’m not sure if it would work. Cleveland has 13 picks to my knowledge. Would it be possible to package some of those picks and try and get back into the top 15 and grab another player that can potentially have an instant impact? It would depend on the teams and their needs and how highly certain players are valued.

I want the Browns to draft more players with starter type impact. We drafted so many rookies last year and it showed. I might flip a table if the Browns trade down to acquire more picks for the 2018 and 2019 draft pick.

Why? Because I’m beyond fed up with trading down year after year. The Browns have no reason to trade down for picks for the upcoming drafts. They need play makers. This team still won’t make the playoffs in 2017, I don’t expect them to. I expect more than 1 win in 2017, certainly. But, all these years of coaches being fired and new front office people being brought in. All these years of bad drafting. All these years of, not only using the talent you already have to the best of their abilities, but keeping that talent around. This is what Browns fans have left to deal with. So it’s time, starting with this off-season, for the front office to get players on this team that Cleveland fans want to watch. The front office needs to get players on this team that are going to get this team back on the winning track.