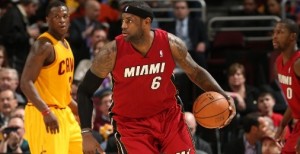 Ok guys, I get that the talk about LeBron coming back to Cleveland is at the forefront of the conversation.  I get that some of us (Dustin)  actually believe he might come back while others (Adam) think there is no shot in hell.  I can see both sides there.

What I don’t understand, and lets be honest, I have no idea why you guys spent 20 minutes yesterday comparing the Bulls and the Cavs rosters,  but how can you say that the Bulls roster is more attractive then the Cavs roster?  That is simply insane!  Let me break a few things down for you.

Argument 1:  The Bulls were a better team last year then the Cavs even without Luol Deng and Rose. Here’s the problem with using this as a measure of what LeBron may be thinking. The Bulls coach  Tom Thibodeau is a master at his craft, he like Pop has the ability to make lemonade out of the sourest lemons ( ok the bulls had talent, but so do we)

Coach Brown… yikes… hes just awful.  He made one of the youngest teams play a half court set with little ball movement.  Also he got fired, therefore the same roster, with a new coach will result in much different results ( Just think about the Cavs with Pop as the coach last year),we win at least 45 games.  Oh and Anthony Bennett; he would have actually showed us something as Pop would have driven him into the ground if he didn’t.  COACHING MATTERS.

Conclusion:  We cant look at the teams performance ( LeBron is to smart to either) as a factor in the decision 2. Players.  This argument yesterday by Chris Fillar comparing Bulls Players to Cleveland’s was hands down the most ridiculous thing I’ve ever heard ( especially since I usually agree with his perspective).

Again, lets look at this from LeBrons perspective. He wants to win now right?  He also was taught a great lesson in what it means to have a TEAM of complimentary players around him vs the 3 star model with aging garbage for support.

1. Kyrie: 2 time all-star, top 5 point guard talent:  Forget the Kyrie of the past, with LeBron on his team, he falls in line.  LeBron Knows this.

2.Dion: Yeah he has an attitude, but next to LeBron with his passing and ability to demand the double team, Dion is a completely different player.  With his ability to get in the paint he immediately is on track for 20 pts a game, and Lets not forget the countless Alley-oops that would ensue.

3. Anthony Bennett:  Ok he is not the first pick in the draft material, but he is still very talented.  With LeBron on his team, he no longer takes on the weight of his draft status and can play freely in a cut and dish offense.  He is a freakish jumper, and Lets be honest, between him and Dion, LeBron should be salivating at having this type of athleticism running down the court with him.

4. TT:  Ok he has his limits, but he hustles and he picks up all the garbage.  You dont ever run a play for him, but  he still manages to average near a double double every night.  (4th player down my list and averages a double double?!  LeBron could only dream of  such Depth in Miami.

5. Sergey Karasev:  Ok you are laughing now, as last year he didn’t play and well lets be honest, Mike Brown had no Idea what to do with him.  But wait who’s our coach?  Who coached Sergey to the Bronze Medal?  That right Coach Blatt.  LeBron isnt dumb, hes watched the film of the kid,  You want a deep threat?  This kid on Lebrons team is knocking down 5 to 6 threes a game.

6. Number 1 pick:  Whether it is Wiggins or Parker  this is just pure bonus at this point.  LeBron has a player he can take under his wing with Kyrie and mold into a trio unlike anything we have ever seen before.  The old model of the Big (Established) 3 may be ending, and the new model of 1 established Super Star and 2-3 emerging stars may be beginning.

It makes sense, why?  Because the Cap rules make it impossible to have 3 max deals and have any semblance of a supporting cast.  LeBron knows this and can ride the youth, and emerging stardom of the Cavs youth to many many years of Eastern Conference Championships, Finals appearances and rings. And one last thing… He will be given Credit for doing it as an innovator, trend setter, not a sellout who needed established super stars to help him get there.

Who else can say they’ve done that?  No one.