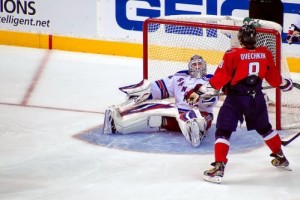 While the New York Rangers didn’t exactly cruise to a series win over the Pittsburgh Penguins, the series did end in five games and the Penguins are one of the softest teams in the NHL. That being said, the Rangers are healthy and well-rested for their second round matchup against the Washington Capitals.

Furthermore, even though the Rangers and Islanders play a very similar scheme, the Rangers are far more talented on defense and especially in net. When you consider that Dan Boyle is the sixth defenseman on the blue-line for Alan Vigneault’s squad, really exemplifies just how talented the Rangers are on defense.

Henrik Lundqvist didn’t earn the name, “King Henrik” by accident as the Rangers goaltender is arguably the best goaltender in the NHL and was outstanding in shutting down the highly potent offense of the Penguins in the first round.

The Washington Capitals on the other hand just endured a seven-game war against the aforementioned, New York Islanders. This series had to of been one of the most physical match-ups in recent memory and the Capitals, who excel in playing the body, were simply too physical to overcome.

Led by the NHL’s best scoring threat in Alexander Ovechkin over the last decade, the Capitals have the firepower to keep the New York Rangers back on their heels throughout this series. Even more important, this team has gotten outstanding play all season from net-minder Brayden Holtby and first year head coach, Barry Trotz has completely turned around this team.

So while the New York Rangers clearly have the edge on defense and between the pipes, the Washington Capitals have the skill-set to skate around you, but also have the size and determination to skate right through you. 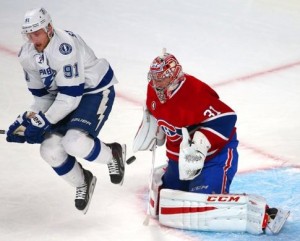 During the regular season, the Montreal Canadiens and Tampa Bay Lightning battled for the top spot in the Atlantic Division. Even though the Canadiens did in fact win the Division title, in the five match-ups between these two teams, the Lightning won all five games.

Furthermore, this will mark the second year in a row these two teams have met in the playoffs as the Canadiens swept the Lightning last year in the opening round of the playoffs. However, there were some factors that played into that decision, one of which was the absence of starting net-minder Ben Bishop, who was out with a wrist injury.

The Canadiens advanced to the second round closing out the Ottawa Senators in six games mainly due to the outstanding play of Vezina and Hart Trophy finalist, Carey Price. As we might recall, Price stonewalled the Senators in Game 6 with 43 saves, a quick whistle and posted a .939 save percentage throughout the series.

However, the Canadiens struggled to score goals during the regular season as they ranked 20th in the league and only managed to score 12 goals against the Senators. On the other hand, the Tampa Bay Lightning, led the NHL with the top offense, scoring 3.16 goals per game.

So while the Lightning only scored 17 goals in seven games against the Red Wings, one has to consider that Steven Stamkos, the Lightning’s best scoring threat, failed to score a goal in the first round. Furthermore, as previously mentioned, the Tampa Bay Lightning dominated the Montreal Canadiens during the regular season winning all five games and out scoring the Canadiens, 21-8.

In the end, this series will be decided with the man between the pipes for each team. Even though Ben Bishop stopped all 31 shots in a decisive Game 7 against the Red Wings, posting a respectable .922 save percentage for the series. The Lightning goaltender looked very shaky throughout the series mishandling pucks, leaving juicy rebounds, and other times looked like a turtle on his back. At the other end of the ice is, Carey Price, who has been red hot ever since leading Team Canada to the gold medal at the Sochi Olympics.