Lewis Hamilton has claimed pole position for the 2015 Austrian Grand Prix despite both him and team-mate Nico Rosberg spinning in the final session of qualifying. The pair were both on their final laps when they both made separate mistakes.

Sebastian Vettel had been considered to be in with a shout of taking pole position, but he only got one lap in on his final run which wasn’t enough to challenge Mercedes. He’ll line up 3rd with team-mate Raikkonen being eliminated in the first session. 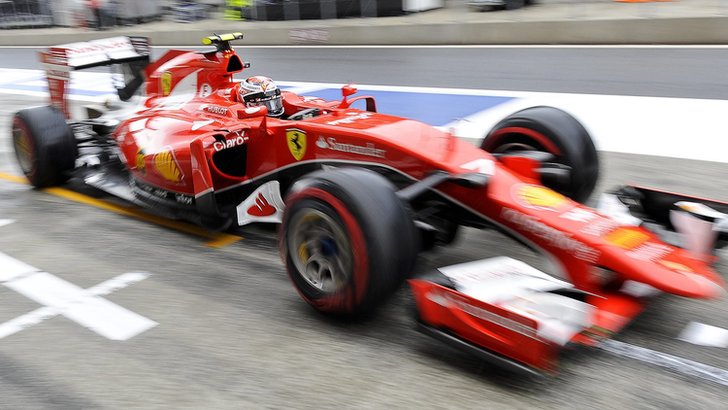 Rain interrupted the final free practice session which was topped once more by Sebastian Vettel.

Interestingly, Vettel was the fastest driver yesterday on the faster super-soft tyres and in practice 3 on the slower compound. There was a high chance that Mercedes could be denied of the Austrian Grand Prix pole for the 2nd year in a row.

The rain had stopped falling in time for qualifying, but the track was still wet and would likely dry during the hour, if not within the first 18 minute session.

A number of drivers headed out on intermediate tyres to test the waters, if you’ll excuse the pun. Max Verstappen, who along with team-mate Sainz had shown good pace in the wet FP3, was one of the first to climb to the top-spot for Toro Rosso despite a big slide in the final sector. Soon he was pipped by Sainz, with the two Mercedes drivers behind them unable to beat them after several laps. Verstappen soon got back to the front again as the first driver to dip into the 1’19’s with Sainz leapfrogging ahead once again.

Vettel and Rosberg briefly broke the Toro Rosso stranglehold of P1 before dry runs began. Felipe Nasr was the first to venture out on track with the dry tyres followed by the Williams and then the Mercedes pair. Bottas took P1 before losing out to Nasr and then Maldonado as the track continued to get faster and faster. Even Jenson Button managing to momentarily grab provisional pole, with Hamilton’s first super soft run unable to displace the Mclaren-Honda.

With 2 minutes left in the session, Nico Rosberg and Sebastian Vettel were unbelievably in the drop-out zone. They soon vaulted up to 1st and 2nd as the track dried more and more. Raikkonen was on the cusp as the checkered flag came out with Perez, Alonso, Merhi, Stevens and Kvyat in the drop-zone but all on their final laps.  Kvyat and Alonso managed to improve which pushed Button and Raikkonen into elimination; the Ferrari driver being the shock elimination from Q1. Raikkonen will advance up a number of positions thanks to massive grid penalties for Button, Alonso and Ricciardo. 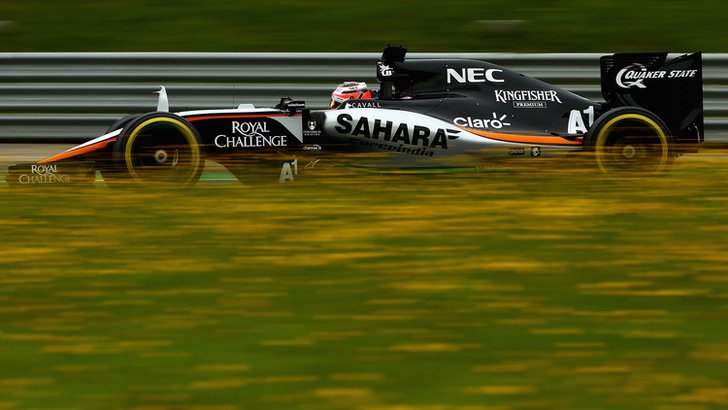 With the lottery of Q1 over, front-runners such as Lewis Hamilton were hoping for more of a relaxed and routine session, with Hamilton ending Q1 in 13th place. There was no question about what tyres to start on, with the circuit more than dry enough compared to the start of Q1. The track would continue to get faster and faster throughout the session however as more rubber was laid down on the circuit.

Le Mans 24 Hour winner Nico Hulkenberg was the first to top the session before being displaced by Nico Rosberg and Lewis Hamilton. Daniil Kvyat slotted in-between the 2 Mercedes drivers as went 1 thousandth faster than Hamilton.

With a few moments left, the two Sauber drivers along with Daniel Ricciardo, Romain Grosjean and Sebastian Vettel were in the bottom 5; with Vettel yet to set a lap. Vettel left it very late to come out and do a lap, but when he did he immediately jumped up to the head of the time-sheets before being just pipped by Rosberg; who had been out for the entire session but could only go 8 hundredths faster.

Pastor Maldonado was just shy of making it through to the top 10 shoot-out as he trailed 10th placed Kvyat by just 2 tenths. Marcus Ericsson, Carlos Sainz and Daniel Ricciardo similarly watched as their team-mates advanced to the final session. Fernando Alonso couldn’t advance any further in qualifying than P15, but he will still start at the back of the grid thanks to a 25 place grid penalty for various engine changes. 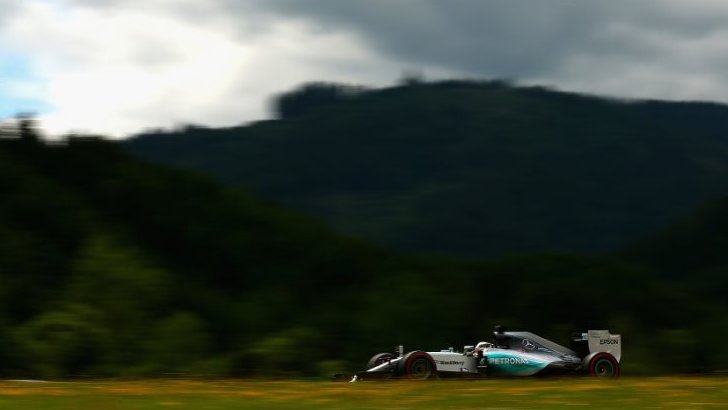 The standard two runs in the final 10 minutes was the order of the day once again. The track was still continuing to improve little by little after the earlier showers, with the fight for pole looking as though it could involve more than just the Mercedes drivers.

After the first runs Lewis Hamilton looked to have turn the tides and finally started putting laps together without mistakes. He led the way ahead of team-mate Rosberg by 2 tenths exactly. Sebastian Vettel was slightly late to complete his first laps that were good enough to put him 6 tenths off after a less than perfect lap.

The drivers came back out for their final runs with about 2 and a half minutes left; almost enough for 2 flying laps for everyone except Sebastian Vettel, who didn’t exit the pits until 2 minutes to go. Mercedes reckoned that the drivers would need 2 flying laps to get a good time and this was proven by Vettel only getting within 3 tenths of the Mercedes drivers’ first laps on his one and only lap. His session and his challenge for pole was over.

Hamilton and Rosberg were still on their final flying laps, but Hamilton got it all wrong at turn 1 after locking the rear of the car. This, like he did last year in Q3, spun his car around and ruined his lap.

Hamilton had a few anxious moments ahead of him. He was still on pole position thanks to his first lap, but he knew that Rosberg was on a lap ahead of him and could still steal pole away. Unbelievably however, despite setting fastest sectors, Rosberg got it all wrong into the final turn and narrowly avoided hitting the barrier. Nevertheless he was stuck in gravel and no chance to steal pole from his team-mate.

No one else could get close to the top 3, with Lewis Hamilton taking his 45th pole position and Mercedes’ 19th consecutive pole position. Nico Rosberg will line-up 2nd ahead of fellow countryman Sebastian Vettel. With the absence of the German Grand Prix this year, this race is the closest they may have to a home round.

Felipe Massa put in a good lap, but it wasn’t enough to replicate his pole position at the Red Bull Ring last year. Nico Hulkenberg’s confidence from winning Le Mans last weekend seemed to be helping, as he took his best qualifying of the season so far in 5th place for Force India. He split the two Williams, with Valtteri Bottas just behind by less than a tenth.

Max Verstappen put in a great lap to put his Toro Rosso in 7th place ahead of Daniil Kvyat and Felipe Nasr, with Romain Grosjean not setting a time in the final session despite his Lotus car having been quick in practice. Kvyat would not keep his 8th place however, as he also suffers a grid penalty for engine changes. 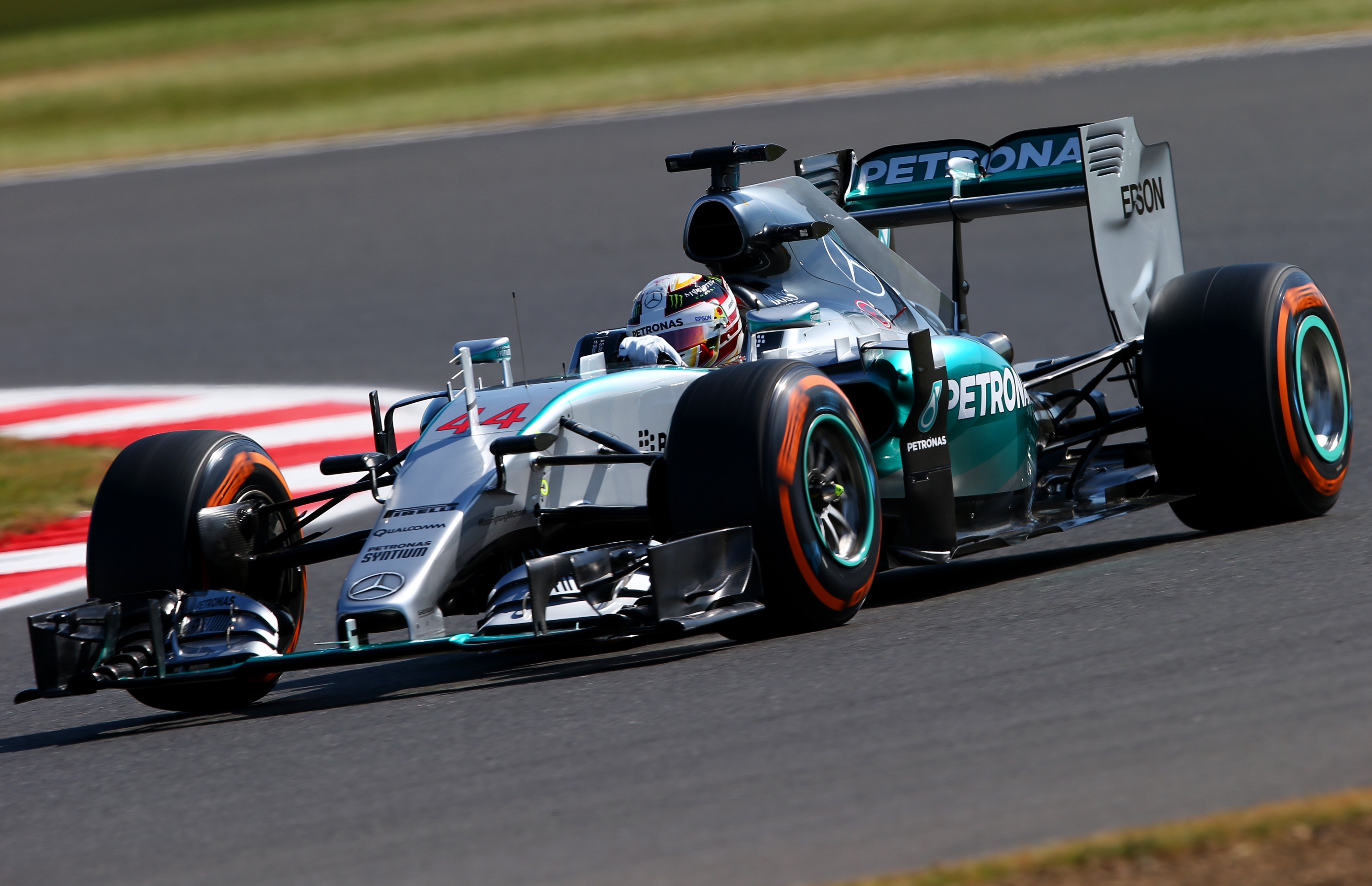 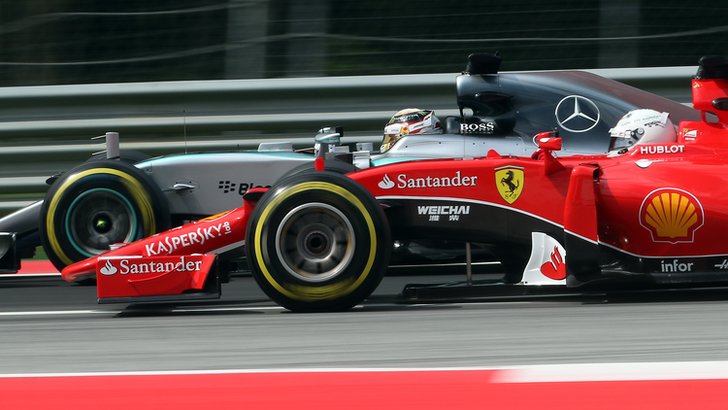