CANTON, Ohio- You can’t spin this Browns loss towards the positive side at all.

The Cleveland Browns fell to 0-11 after a 30-16 loss down in Cincinnati. And that score does not indicate how lop-sided of a game this really was.

The Browns tried to make a game of it late in the fourth quarter. But again, nothing.

DeShone Kizer went 18/31 for 268 yards. He was sacked 3 times for 23 yards. Kizer left the game early in the second quarter and entered the concussion protocol, but quickly returned. Cody Kessler did absolutely nothing when he did come in.

Kizer did make some nice throws, including one to WR Corey Coleman, but Coleman dropped it. The ball was placed perfectly and Coleman dropped, what would have been, a nice touchdown pass.

Coleman had 3 receptions for 64 yards including the longest pass play of the day. A 44-yard passing play.

Isaiah Crowell had his best game of the year, as he carried the ball 16 times for 95 yards.

I’m still wondering why Hue Jackson continues to use Crowell as the main RB. I’d be shocked if Crowell is still a member of this team next year.

Last week, I wrote how Cleveland needs to use Duke Johnson as the main running back and use Matthew Dayes in relief. I also said that’s not going to happen this year with this coaching staff.

Gregg Williams’ run defense did not show up today. The Bengals rushed for a total of 152 yards. Joe Mixon had his best day of his rookie year today. Mixon carried the ball for 114 yards including one touchdown. Mixon also hurt the Browns in the air. He caught 3 passes for 51 yards including a 36-yard passing play.

Cleveland, as a defensive unit, had a lot of problems making tackles today. The Browns had a lot of missed tackles.

Myles Garrett had a sack today.

I did not like the flag thrown on Jabrill Peppers late in the game on a Cincinnati receiver. Peppers was called for a hit on a defenseless receiver. Not just myself, but the CBS crew calling the game agreed with me.

Unfortunately, penalties/fouls are something the NBA and NFL have in common. Both are very inconsistent and both have rules that need clarification.

I know I’ll be going away from the game a bit here, but I think it’s ridiculous for anyone to hang their hopes of the Browns saving this season in any ways, on the return of Josh Gordon next week, when Cleveland travels to Los Angeles to play the Chargers.

I’m not ready to give Gordon any credit just yet. First, he has a lot of proving to do, both on and certainly off the field. The last season Gordon was on the field, there was evidence of Josh giving up on routes and plays in general.

What’s worse? This team is young, sorry, I had to say that, but it’s the truth. I’m not using that as an excuse. What I’m implying is that this team has no idea what winning feels like at the NFL level. This receiving core lacks a lot of talent as well. My point? Josh Gordon is going to be relied on heavily to produce ASAP and help out these younger receivers he’ll be taking the field with.

Can Gordon be trusted? All of his teammates know everything at this point. Gordon will have to lead by example both on and off the field. I’m not sure he is ready or capable of doing that right now.

Although this is talk for further down the road, I can almost guarantee that there will be changes made after the season is over.

How soon will these changes happen? What changes will be made? And maybe better yet, who will be replacing those that are let go?

I’ve been the guy saying that Cleveland needs to give whatever plan they put in place, at least 3 seasons, regardless of the results. Well, even I’m smart enough to know when something just isn’t right. This isn’t the right group to handle the monumental task of getting the Browns back to where they should be. It’s one thing to have continuity, but you must have the right people with that and progress must be seen.

When you have your teams “General manager” Sashi Brown telling the media that a guy like Kenny Britt, who has been a cancer to this team, both on and off the field, that he has multiple years to get himself on track and prove his worth. That type of mindset right there, is why the Browns have been the joke of the NFL, for as long as they have. Especially with this front office. When I say all 31 other teams would have cut him by now, I’m pretty confident in saying I guarantee that. 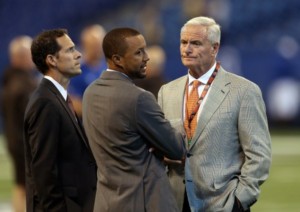 Cleveland Browns chief strategy officer Paul DePodesta, executive VP of football operations Sashi Brown and owner Jimmy Haslam have a lot of explaining at the end of the 2017 season.

This team has a lot of changes coming once the game in Pittsburgh ends on December 31st 2017. And if they don’t, 2018 could be ruined 7 months before it even starts.